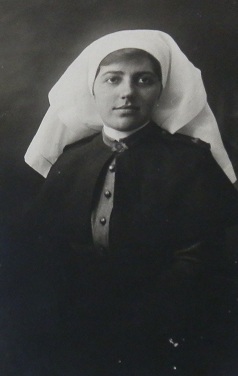 Amongst the correspondence received at the monthly meeting at the Bendigo Hospital Committee last night was the following letter from the matron of the institution (Miss E. Simons):—"Having been accepted for active service, I beg that you will grant me leave of absence for 12 months, and, if possible, that you will release me from duty on this day week, 23rd inst. While regretting that this will mean leaving the hospital that has been my home for nearly 11 years and everyone with whom it has been such a pleasure to work, I feel that my opportunity has come, and I must take it. Trusting that yon will find it convenient to grant my request and to allow, me the privilege of some day returning to my duties here.--Ethel Simons. A communication was also received from Miss M.D. Farquharson, predecessor to Miss Simons, which read:—"I have today learnt that Misa Simons has received her call for military duty, and I have long promised,with your consent, to offer my services asher locum tenens without salary if Sister' Forbes were given to me as assistant matron, hoping that she might receive the full remuneration.—M. D. Farquharson."Mr. A. .Mackay moved that Miss Simons be granted leave of absence as asked for. He  said Miss Simons had studied the interestsof the institution as far as possible during the many years which she had been connected with it. Now that she desired to go to the front he thought, they should give her permission to do so, and should keep her position open until her return. He was sure they all wished her every success in the other part of the world. Mr. A. Dunstan seconded the motion, which was carried. Mr. A. Mackay then moved that Miss Farquharson's offer be accepted, and that Sister Forbes be appointed to act with Miss Farquharson at an increased salary of 199  per year. Mr. N. Howell seconded the motion, and it was carried. A motion that a special letter be sent to Miss Farquharson expressing appreciation of her offer was  submitted by Mr. A. Mackay, who consider that the hospital was very fortunate in having such a woman as Miss Farquharson  living in their midst. The motion was seconded by Mr. M. Cohn and carried. Mr. R. Hyett moved that a letter of appreciation be forwarded in Miss Simons for her services to the institution. For many years she had been an efficient matron. and he thought they should convey to her their appreciation of her services, and their best wishes for her welfare during the forth  coming 12 months when she would be away on active service. Mr. N. Howell seconded the moton. Mr. B.S. Marks suggested  that the visiting committee should arrange for a suitable presentation to Miss Simons. The suggestion was adopted, and the motion was carried unanimously.

An interesting letter from Matron Ethel Simons, of the Bendigo Hospital,who is on active service in London, was read at the last meeting of the committee of management. Miss Simons wrote." I can hardly believe that it is already six months since I left Bendigo. A great deal has happened in the time, but it has gone very quickly. I am still nursing in a hospital for jaw cases at Norbury, just about an hour from London by bus. Of course, like everyone else, I won't be satisfied till I get to France, where there is real hard work. This seems too much like play. Of course, I am enjoying my'off duty' time to the full, as I may never get the chance again. I have seen a wonderful lot, I think, in London itself as well as outside. I have only made use of one of your letters so far, and that was  to the secretary of St. Bart's Hospital. I choose that one first because my father did his medical course there.  It was quite nice to be able to see his signature on the register. Lately I have been enjoying a treat, viz, grand opera at  Drury-lane. We are able to book quite nice seats cheaply, and are taking full advantage of it. How I should love to see London when there is no war. It must be simply gorgeous. Now everything has to be so dark that I am always afraid of losing my way, and when it is moonlight one has to hurry home in case of air raids. When a warning comes it is quite easy to be left stranded in the city-buses and trams all stop. List night we had a very noisy night. I do't know how many aeroplanes came over, but we were kept awake for hours by the firing of our own anti aircraft guns. We heard the buzz of the machines quite clearly, and bombs were dropped quite near by. It is certainly rather trying. I feel very sorry for the people who have had all the anxiety for months. Housekeeping is a bit of a problem over here; egg are to be 6d each this week, butter is still often unprocurable, and it is quite common for people to wait in a queue for an hour, and then get the huge amount of 2oz of ta and 2oz. of sugar. I believe that the grocers are overdoing it a bit, but, of course, there must be a shortage. It does not look much as if the war will end soon, does it ? There was quite a hopeful feeling in the air till Russia and Italy had such setbacks. It looks as though I shall have to ask you for an extention of leave or else that you will fill my place permanently. I could not possibly come back while there is so much to do, could I ? However, I'll wait a little longer, and see how things are going before asking you definitely. I should certainly like to feel that I had my position to come b-ck to, but I don't wish to be greedy." Miss Simons, it may be mentioned, was a former resident of Kerang, where her father, Dr C. N.Simons was in practice for some years.

Kerang New Times Tuesday 22 January 1918 page 2
Miss Ethel Simons, who was matron of the Bendigo Hospital prior to leaving for active service, has written from London resigning the position of matron, as there is no prospect  of her returning to Australia for some time. Miss Simons's resignation has been accepted, and the committee of the hospital has decided to forward her a letter of appreciation of her past valuable services. The young lady referred to is well-known in this district, being the daughter of Dr. C. N. Simons, who formerly practised here.

Born 1886 in Preston, Vic.
Daughter of Robert James SIMPSON and Mary Lilly nee SUTTON
Sister in law G SIMPSON
Of Geelong, Victoria
Occupation prior to enlisting: Nurse
Trained 3 years Geelong Hospital
Enlisted 27 February 1917
Embarked 21 March 1917 from Sydney per ‘Kanowna’
Aged 29 years
Served in England
Returned to Australia 10 March 1919 per ‘Delta’
Appointment Terminated 25 July 1919
Married Richard George CORDINGLEY in 1920
​Died 1922 in a private hospital in Camperdown, Vic.
​Buried Geelong Eastern Cemetery EAS METH 05 807 077
The internment of the remains of the late Mrs. Amy Alice (Pop) Cordingley, on Derrinallum, and formerly of Geelong and only daughter of Mr. Robert James Simpson of Nelson Street, Newport and formerly of Geelong, took place on Monday afternoon, her remains being interred in the Methodist portion of the Eastern Cemetery (privately) in the presence of the immediate relatives and a few personal friends.  Rev. C R Andrews of the Presbyterian Church, Derrinallum, and Rev. Charles Neville of Newtown Presbyterian Church,  conducted the burial service at the graveside.  Mr. Alex Monro funeral director of Ryrie Street arranged the mortuary arrangements.