Awarded Royal Red Cross
Date of Commonwealth of Australia Gazette: 15 September 1919
Location in Commonwealth of Australia Gazette: Page 1372, position 14
Date of London Gazette: 3 June 1919
Location in London Gazette: Page 6842, position 9
Another Queensland nurse has been awarded the distinction of the Royal Red Cross— Sister Louie Snelling, who left with the hospital ship Kyarra shortly after the outbreak of war, and served in clearing hospitals in Egypt, France, and Belgium. Like so many of our successful Queensland sisters, she was trained at the Brisbane General Hospital.

Nurse Solling, who was mentioned in despatches last week by General Sir Douglas Haig, is the eldest daughter of Mr. and Mrs J.S. Solling, of West Maitland.  Trained at Sydney Hospital, she was for about two years matron of the Berima District Hospital at Bowral, and was subsequently matron a the Crown Street Hospital, Sydney, until about a year ago, when, having offered her services to the Imperial Government, she left Sydney for London.  She disembarked, however, at Egypt, and worked at the Luna Park Hospital until she left for France.  Since her arrival there Nurse Solling was attached to the Labore B G Hospital at Calais. When last heard of she was in London recovering from an attack of German Measles.  A brother of Nurse Solling, Lieut K.M. Solling was killed in the Gallipoli landing, and another is in France with the Australian Forces.

Awarded Royal Red Cross
Sister Solling, who is the eldest daughter of Mr. and Mrs. J.S. Solling of West Maitland, was trained at the Sydney Hospital, and occupied the position of Matron of the Crown Street Women's Hospital prior to entering upon war work.  She proceeded to Egypt, and afterwards to London, and is now attached to one of the casualty clearing stations in France.  She was mentioned in despatches about 18 months ago.  Her brother, Lieutenant Eric Solling, was killed in action at Gallipoli, and another brother, Sergeant Reginald Solling is at present in France.

Sister Solling, known as 'Minnie', was an Australian who served during the First World War with Queen Alexandra's Imperial Military Nursing Reserve, gaining a Mention in Despatches in 1916 and the Royal Red Cross for her bravery.

Born 16 September 1887 at  Strathfieldsaye, Vic.
Daughter of Thomas SOMERVILLE and Elizabeth Anne nee GLEDHILL
Of 'Somerset Park' Strathfieldsaye, Vic.
Aged 30 years
Enlisted 07 November 1917
Embarked 16 November 1917 from Sydney per 'Canberra'
Served in Bombay
Returned to Australia 08 May 1919 per 'Eastern'
Did not marry
​Died 07 May 1972 in St. Kilda, Vic.
​Late of Balaclava, Vic.
​Cremated 09 May 1972 at Springvale Botanical Cemetery and remains collected

Major (Dr) Lee Abbott, of Bombay,in a letter to Mrs. Sorensen, of Sandgate, regarding her daughter, Sister Sorensen, formerly of the Brisbane General Hospital, writes -'I feel it my bounden duty to write you a short letter of appreciation of your daughter It is in age of changes, and all nursing sisters who have been six months or more in a hospital ship and being transferred to hospitals ashore.  The result has been that the last time we were in Bombay all our Australian Sisters were transferred.  It was a great blow to us for we realised what splendid nurses, from all points of view, they were.  Never have I worked with those more capable.  Your daughter was the Sister in my ward for some time and I am sure many an invalid had her to thank for being made comfortable, further, many  a mother, and maybe wife, also thanks your daughter for having saved her dear one's life. Quite a number of cases she absolutely dragged out of the grave by her assisuous care and resource."

At a recent meeting of the Committee of Management of the Hospital for Sick Children, Brisbane, Miss Christine Sorensen was appointed matron. Miss Sorensen received her early training at the Brisbane General Hospital during the years 1910-13, after which she was appointed to the staff, being in charge of the Infectious Diseases Branch. She passed her State registration examination in 1913, and was elected a member of the Australian Trained Nurses' Association. Upon the outbreak of war Miss Sorensen volunteered for service abroad, and sailed on the first hospital ship to leave Queensland. She subsequently served in Egypt, India, Mesopotamia Macedonia and England. During her service abroad she was promoted to the position of matron of the 60th British General Hospital at Salonika, which contained approximately 2000 beds.  During April of last year she was appointed matron of the Rosemouut Repatriation General Hospital, the chief repatriation hospital in Queensland, where she is held in the highest esteem by patients, medical staff, and nursing staff. 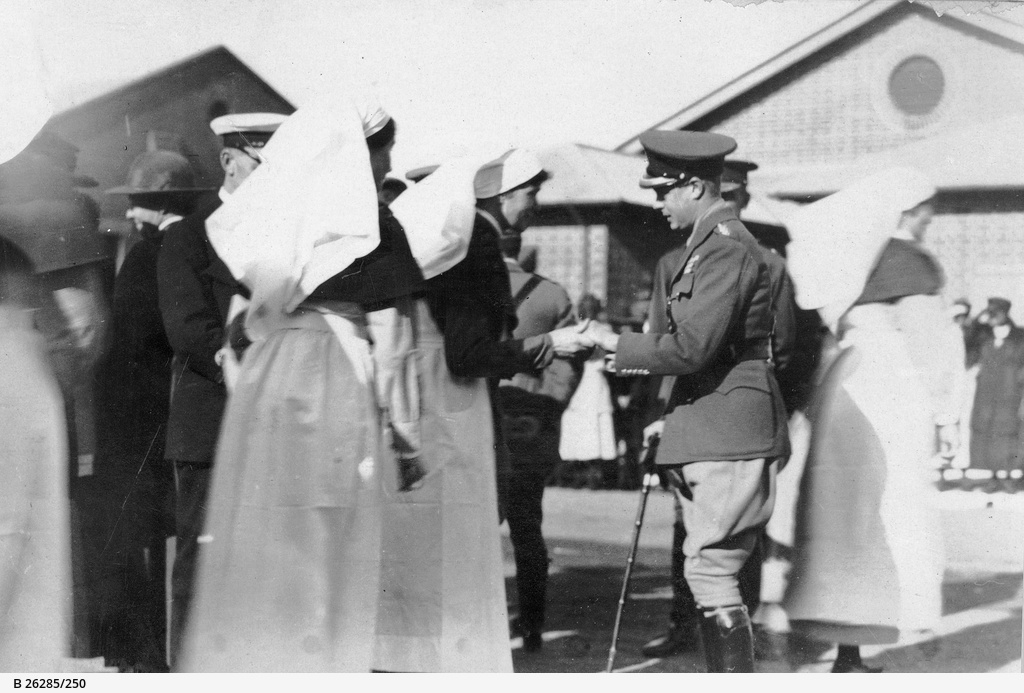 Sister Souter shaking hands with HRH Prince of Wales SLSA B 26285/250
The "R.C.," as the nurses call the Red Cross, has been conferred upon Sis. Jeanette Souter, a daughter of the well-known Australian medico and author, who lives in the city of Adelaide.  Nurse Souter is a N.S.W. girl, and was born at Hillston not many years ago. Sihe was a clever artist in her early teens, and her father had ambitions of training her for is career of painting, but Jeanette had other dreams. She had always yearned to be a nurse, and after much persuasion induced her parent to take a sympathetic view of that career. She became a trainee at the Blue Sisters' Private Hospital, North Adelaide, which is a sister institution to our Lewisham Hospital. Sister Souter passed for the first batch of S.A. nurses who volunteered for foreign service, while she as Chargd Sister at Keswick Military Hospital, Adelaide, and in August, 1916, she was sent to the Victoria Hospital, Bombay. After a period at Pershawar she was awarded her second star, and in August 1917, she volunteered with others for Salonica, where she is at present.  She was recently made superintendent of nighlt nurses, and was awarded the Royal Red Cross about the same time.

That reminds me to tell a story of a pretty romance that had its foundation there. Sister Souter (Royal RedCross), who had had war service in India, Salonika, and England, was charge nurse at Keswick, and she ultimately married Captain Fullarton. Sister Souter, by the way, is a daughter of Dr. C. H. Souter of Adelaide. They have a seven-year-old daughter.

Born 11 July 1882 in Mudgee, NSW
Daughter of Joseph George SOUTHWARD and Margery nee COLLIER
Enlisted 16 July 1915
Educated Sydney, NSW
Trained at Royal Prince Alfred Hospital 08 January 1910 to 20 September 1914
Sent to France from England
Served 41 Stationary Hospital
To 5 Casualty Clearing Station 17 November 1917
Admitted to Hospital in England whilst on leave 07 January 1918 with strangulated hernia and was operated on
She remained there about a month  and was given a months leave.  A week before expiration of her lave she was again admitted to Milbank and was found to be suffering from Arthritis of the hip join, and was then sent to Vincent Square Hospital, where she remained three weeks and was granted sick leave.
Granted sick leave to 05 May 1918
Arrived at Frensham Hill Hospital for duty on 04 June 1918 and found she was unable to carry on her duties on account of the hip joint trouble.
Discharged 31 July 1918
Returned to Australia
Resided 'Kadina' Ocean Street, South, Bondi, Sydney, NSW in June 1920
Married Roland Bertram Tom NIX
​Died 21 June 1961 in Manly, NSW
​Late of Katoomba, NSW
Powered by