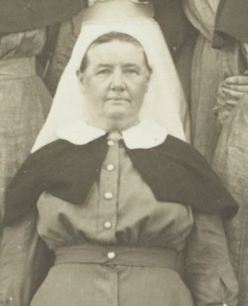 Matron Pauline Pierre-Humbert died in Epworth Hospital on Saturday, after a lengthy illness, at the age of 66 years. She trained for a nurse in Castlemaine Hospital, after which she served as a sister at Austin Hospital. For 23 years she acted as matron of Williamstown Hospital,where she rendered signal service.  During the war she spent three years in military hospitals abroad, having her first experience at Lemnos. Following upon the evacuation of Gallipoli she was attached to the Cairo General Hospital, afterwards proceeding to England and Rouen (Third Australian General Hospital), rendering service at the various centres.  Upon her return to Australia she resumed charge of the local hospital, retiring about three years ago.

Had charge of the Williamstown Hospital before going on active service.
She was chief matron of the hospital for nine years, having been trained at the Castlemaine Hospital.
She had charge of 4th Aust. General Hospital at Abbassia and was mentioned offically for her meritorious service on behalf of the wounded.

Our Heroic Men.
AND WOMEN TOO.
"GOD MADE 'EM TO MATCH THE MEN.

A very interesting letter from Nurse Evelyn Humphries, has been received by Mirs W. Hugh McMahon, from Heliopolis, Palace Hospital, Egypt.
It ran thus :" We have left Lemnos and returned to Heliopolia, but we are only here for a little while and expect to move somewhere else shortly. I was scary to leave Lemnos for many reasons but of course, for others I am glad. For instance, it was delightful to get a bath and clean clothes and the fresh things to eat after so much tinned food was very welcome.  At first it was hard work to get sufficient food for our boys let alone ourselves. We belonged to the stationary (first after a clearing), not to the General Hospital there, where were 23 sisters, while at the General there were over 100 ; nevertheless I am glad to be one of the 23.  "Previously they had no sisters, so the men were more than pleased to have us to look after them. Poor chaps ! They needed it, too. Most of them were on the ground, and to attend to one man you knelt on the next man's mattress, and as these were jammed close together, you had to be careful lest you knelt on your patient. Each tent served 20 men. We were wanted there it ever we were in our lives, and I was so glad to be one of the fortunate ones chosen, though at the time we did not consider ourselves fortunate."The day we landed the officer in charge came down to meet us and said,"Oh, you have come to a dreadful place. Everyone dies here -two sisters died last week " Very cheerful, was it not ? I may have to return to Australia on transport, but I hope not. I have no wish to return until it is all over, but the sooner that is so the better. I cannot say enough for our boys -we had Greeks, French and Turks as well as our own and English boys at Lemnos, but no one comes up to our own Australians - they are fine ! I know which I would rather nurse. I consider they deserve everything we can give them. Our men have won a name for courage and endurance, but me thinks our women are heroines, too. "God made 'em to match the men."

I heard lately that Sister Madge Hussey has retired from long service in the Repatriation Hospitals at Keswick and Daws Road, and has built herself a cottage near Overway Bridge, Belair.  Madge's parents succeeded the Bleechmores at the Clare Post Office.

Head Nurse at the Hospital.
Nurse M. Hutton, formerly of Hathurst, recently appointed head nurse at the Maitland Hospital, has written from her home at Glen Innes stating that she will be able to take up her duties on Wednesday next.

About 40 friends of Sister Hutton gathered at her home in Meade Street on Saturday afternoon to extend congratulations on her 80th birthday. Her home had been beautifully decorated with flowers for the occasion, and a delightful afternoon tea was served. Sister Hutton received many congratulatory telegrams and telephone messages, and was the recipient of numerous beautiful gifts. She was also presented with a lovely spray of flowers.

40 Years in Red Cross
Two members of the Glen Innes branch of the Australian Red Cross had a special interest in the 40th anniversary of the society which was celebrated last week.

They are Sister Hutton, and Mrs. J. Ross, who both joined the Red Cross in the year of its inception'.The Society was formed in Australia on August 13, 1905. Sister Hutton joined the next day, August 14.

Born 27 September 1877 in Penshurst, Vic.
Daughter of John HYDE
Married 06 May 1903 at St. Kilda Vic. to James William Daintry KEKWICK
Divorced 25 February 1918
Mother of Daintry Ned KEKWICK (her son)
Age 41 years
Enlisted 28 June 1918
Embarked 16 October 1918 in Sydney per “Malta”
Service in Egypt
Returned to Australia 02 August 1919 per “Delta” On Duty
Discharged 26 September 1919
Enlisted in her maiden name as she was divorced late in 1917
Legally she was Mrs. Kekwick not Miss Hyde
A flurry of paperwork, a statutory declaration and a lawyer were required to alter the records
Died 15 May 1952 in Perth, WA
Aged 78 years
Resided Mosman Park, WA
Buried Karrakatta Cemetery Crematorium Rose Gardens 4C 055