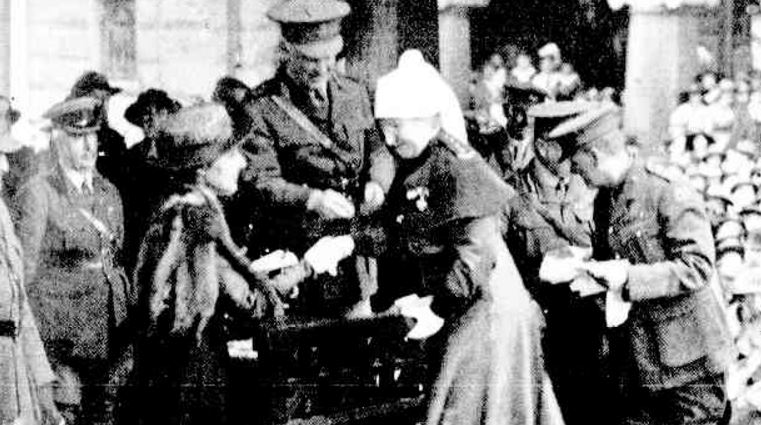 Daughter of John Russell ROSS and  Isabella Jane nee CAIN
Embarked for Australia per 'Osterley' 21 May 1919
Did not marry
Died 12 December 1924 in Caulfield Repat Hospital, Melbourne, Vic.
Late of Caulfield, Vic.
At the time of her will dated 26 November 1924 she was residing at 'Kincraig' Yarra Glen, Vic.
Her mother's obituary in 1932 said she died of an illness contacted during the war
Her will bequeaths the following -
To my Sister REAT LESLIE BAGGS my picture of The Little Sister and my French Howitzer Shell
To my Neice INA ARNOT MAXWELL my Normandy Basket Brooch
To my Friend VICTORIA MARY SEYMOUR my German Engraving Shell Case
To my Neice ELFIE MAXWELL my engraving of Saint Circle not being the one seated at the organ
To my Brother WILLAIM ROSS my brass ash tray with the coat of arms of Arras on it and my Khaki travelling blanket
To my Neice JEAN ARNOT LODER my French silver neck chain and silver medallion of the Weeping Angel
To my Friend WILLIAM KENNETH McKENZIE LYALL  my water colour sketch  of Jock in Highland Uniform
To my Friend ERNEST EDMUND RUMLEY my picture entitled 'Who will buy my Violets?'
To my Friend AMELIA COLLIE my gold Bamboo bangle
To my Friend MARGARET MABEL COLLIE my small cut glass and trinket box
To my Sister JESSIE CUNNINGHAM BROWN five shares in the Yellow Cab Company and all money remaing in my cred in my Savings Bank Account to be used by her for the maintenance and education of my Nephew JOHN PETER MICHAEL CUNNINGHAM BROWN
To my Niece MADELINE LESLEY BAGGS the sum of ten pounds
To THE YARRA GLEN FOOTBALL CLUB the sum of five pounds
To my MOTHER  the remainder of my personal property

Our Christmas Hills correspondent records the death of Miss Isabel Russell Ross, a well-known war nurse, on 12th inst. She went to the Great War on April 14, 1915, with the Queen Alexandra's Imperial Military Nursing Service Reserve, and gave continuous service throughout the war. Nurse Ross was a daughter of the late John and Mrs Russell Ross, of "Kincraig," Yarra Glen. She was a sister-in-law of Mr G. A. Maxwell, M.H.R., and Mr H. Campbell Jones, of the "Sun," and a niece of Mr David Ross, the astronomer. 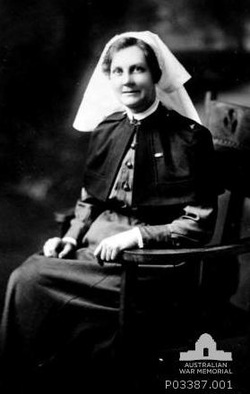 
Read more here
Sister L. J. Rutherford, A.R.R.C., who will arrive by the troopship Orita tomorrow, trained at the Hay Hospital, when Matron Cornwell was in charge.
She went to Salonica with the Australian nursing unit which Mrs. McHardie White took out there in 1916.

AFTER a long friendship which began in the Perth Hospital before the last war, two returned army nurses have undertaken positions as Matron and Assistant Matron of the War Nurses' Hostel.
They are Sister Isabel T Borwick and Sister Kathleen Ryan.  Sister Ryan, who trained at the Perth Hospital when Sister Borwick was a staff sister, will be assistant matron of the hostel.  During the last war she served three years in the British Army Nursing Corps, and later spent two and a half years with the Queen Alexandra  Imperial Nursing Reserve. On her return she entered the Repatriation Department and nursed in Kalamunda for over five years.

A military funeral was accorded Sister Lucy H. O'Ryan at the Woodbridge Church of England cemetery yesterday. The service was conducted by the Revs. A. A. Bennett and C. Roberts. Mr. Bennett said it would be practically impossible to estimate the value of her services as a nursing sister, and servant of the Church. During the South African War she was matron of a British hospital, and subsequently in England established a hospital. In the First World War she served throughout with conspicuous courage. Since her retirement in Tasmania she had keenly supported the Missionary Society, and was a founder of the Church Army.  She generously contributed to the establishment of the Training College in Newcastle for Australian officers and sisters.

Funeral arrangements were carried out by Alex. Clark and Son, of Hobart.