Mrs Marion Theresa Reid, wife of Major J. B. Reid, of Barker's rd, Kew, died in a Melbourne hospital on Friday. She was a returned nurse of the last war and served in India, Africa, and Egypt. Before her marriage she was Miss Bignell. After her marriage she spent 20 years in India, where her husband was attached to the Army. They were in New Guinea and Rabaul for two years, leaving shortly before the Japanese occupation.

Mrs A W Thynne Nambour has received a cablegram from her sister.  Sister Edith Bird one of the staff nurses from the Randwick Military Hospital announcing her safe arrival in Egypt.

Born 17 November 1871 in Woollahra, New South Wales.
Daughter of George Henry Fisher and Frances Maria nee Sainsbury.
She was married to Andrew Jameson Ogilvie in 1896.  Her husband drowned in Western Australia in 1906.  She married Thomas Brougham Birkbeck in 1908 in Victoria.  Her only child, Maxwell Ogilvie was a Lieutenant with 3rd Gordon Highlanders was killed in action 5 November 1917. Ada died 16 October 1948 in Monte Carlo, France.
News comes from England of Mrs. Tom Birkbeck of Melbourne Mansions, Melbourne having been spending a holiday at Monte Carlo. Mrs. Birkbeck went to England to see her son, Max Ogilvie, who was at Harrow and enlisted. During the last three, years Mrs. Birkbeck has been doing strenuous war work nursing in a London hospital.  Her son made the supreme sacrifice about two years ago. He was certainly one of Westralia's most promising and very charming sons.

Sister Margaret Coombe Birt, who died at her residence in Serpentine-road on Friday last, was possessed of a distinguished record of war service. She served in the Boer War and enlisting in August, 1914, served all through the Great War as matron of the Red Cross hospital at Huntingdon, terminating her appointment in July 1919. The authorities awarded her the much coveted Royal Red Cross. Her interest in the men never waned and she played a prominent part in establishing the Avenue of Honour to the local fallen soldiers, which is set on Middleton-road. All sections of  the community assembled on Sunday afternoon to pay respect to the departed Sister. The remains were accorded a Military funeral in recognition of the years of service rendered to the Empire.  The chief mourners were Mr. and Mrs. E. P. Birt (Tambeilup). Mr. A. T. Birt (Tambellup) Mrs. A. E. Bradshaw, Mr. and Mrs. F. Bradshaw. Miss Jean Birt (Perth), and Mr. and Mrs, H. E. Bilney. Many beautiful floral tokens of sympathy were sent and messages came from all parts of the State.

Nurse Birt, writing to her mother, Mrs. P. H. Birt, Lillimur, says:—  "How the time slips by when the days are full-we have been in France four months! I do dread the the sight of  that cold weather. We are not having any really hot weather- it just warms up for a couple of days, and then, we have a beastly cold change. This week, on 11th July, we had great excitement. Queen Mary called on us when I say us, I mean the No. 1 Australian General Hospital, etc. All the Australians from here were invited over to see her. Of course, we all put on our clean caps, aprons, etc., just out of the bandbox style. All the sisters were lined up in two rows, and Queen Mary stepped out of her motor car on the tick of 11.30 a.m. (the time arranged for her arrival), and walked up between the sisters after shaking hands with the matrons and O.C. As Queen Mary went along (followed by half a dozen officers) she bowed as she went, and as she passed we bobbed.  The Duke of Connaught was with her, and also the Prince of Wales. The latter looks just a dear little boy, is very small, but looks healthy. He was pleasant and natural, and wore the uniform of a staff captain. The queen was most beautifully gowned and hatted. Her hair is going grey, and is not now the lovely golden hair it was when she visited Australia. She went into two huts where the most acute cases were, and briefly spoke to the wounded men. Her manner appeared somewhat abrupt, but I suppose the poor woman is bored to death. She visited the sisters' quarters, and said they were beautiful, then walked back to her motor car and left while the soldiers cheered her and the little heir. The Prince stood up in the motor to see something-a pretty sister, the M.0. said and his stately mother pulled him down by the coat.  Three of us one afternoon went out to the boys' camp. There we saw the whole unit again, and two of our friends accompanied us into town where we had dinner. 'They said it was just "bonza" to chat with someone they knew. Australians are like the Scotch-very clannish. They talk about our soldiers being undisciplined, but one thing I always feel proud of them for is they never forget to salute a sister, even if they don't know her.  The English sisters think it just lovely, as the Tommies never salute them. We are told we are leaving here on the 16th. All Australian sisters are being gathered up and sent to Australian hospitals.

Awarded Royal Red Cross (2nd Class)
Date of Commonwealth of Australia Gazette: 25 July 1917
Location in Commonwealth of Australia Gazette: Page 1544, position 20
Date of London Gazette: 23 February 1917
Location in London Gazette: Page 1949, position 2
​Matron Bishop Dies In Melb.
Miss Elizabeth E. Bishop, who was an original member of the Australian Army Nursing Service of the 1st Military District (Queensland), has died in
Melbourne.  The late Miss Bishop, who trained at the Brisbane General Hospital, had a very distinguished career. At the completion of her training she became a sister on the staff. Later she went to Melbourne to do private nursing.
As there was a shortage of nurses at the outbreak of the 1914-1918 war, she returned to Brisbane and rejoined the staff of the Brisbane Hospital. After a short period there she was appointed Principal Matron of the 1st Military District (Queensland), and matron of the Kangaroo Point Military Hospital.
For her war work she was awarded the decoration of an Associate of the Royal Red Cross. At the end of the war Miss Bishop went to live in Melbourne, and later visited England with her sister. Miss Mabel Bishop, by whom she is survived. 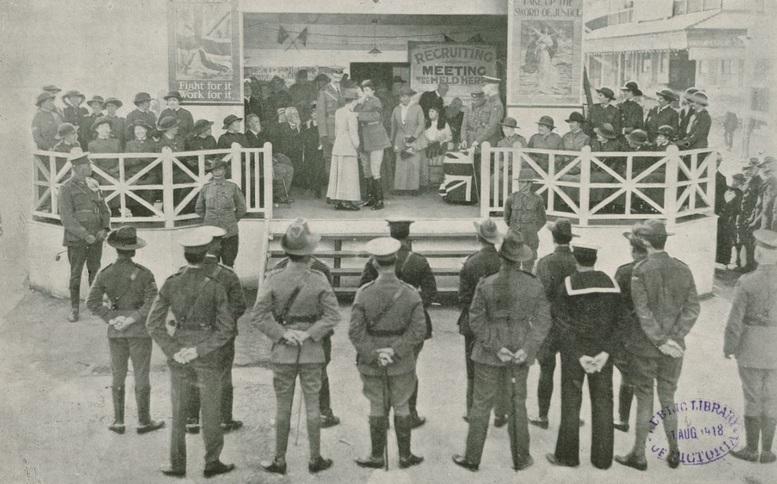 Presentation of Decorations by the Governor-General at the Albert Square Recruiting Depot on August 7.
The Queenslander Saturday 17 August 1918 page 26

Sister Lily Mary Cox (nee Bishop), who died on 10th June, 1927, was the second daughter of the late Mr. Thomas Bishop and Mrs. Bishop, of "Wurley," Grey Street, Mount Gambier.  Born in Wilcannia, on the Darling River, N.S.W., in 1880, she was brought up in the South-East of  South Australia. She trained for a  nurse in 1903 at the Children's Hospital, North Adelaide. When she finished her training she undertook private nursing for some time, and afterwards went to the Woman's Hospital, Melbourne, where she went through a course of training in mid-wifery. She  returned to Mount Gambier, and started the Mount Gambier private hospital, which she carried on for some time. She gave up the hospital work, and returned to private nursing throughout the South-East.  In 1913  she went to Sydney 'or private nursing, and in 1915 went to Queensland, and was private nursing there until 1916. Sister Cox then went to Rosemount Military Hospital, and joined the Queensland A.I.F. nursing staff. In  September, 1916, she left Brisbane for Sydney to join the hospital ship Karoola, and on 16th September left Sydney for overseas. On the 26th of September , the boat arrived at Fremantle, and reached Bombay on 10th October. She arrived at Poona on the 29th October, and went on duty at the station hospitals. From there on the
13th November she went on duty at the barracks hospital. After being there for some time she returned to Australia by the s.s. Dunera, and was at home from 29th June to August 3rd.  On August 9th, Sister Cox went to the base hospital for orders, and on 23rd August left Melbourne for Adelaide by train in charge of wounded soldiers.

Later, she left Adelaide for Melbourne, and then on to Sydney, and on 31st August left Sydney by H.M.T. Willshire for Suez, where the boat arrived on October 5th. On the same day she  left for Alexandria, and went on duty at the 17th General Hospital. Later she was transferred from Alexandria to Salonika, where she arrived on April  19th by the s.s. Gorgar.  Sister Cox  went from there to many other important stations, and finally to England, where she received orders to return  to Australia. As soon as she arrived n Australia she got her discharge from the military authorities, and returned to her profession in a private  capacity. Three years ago she was  married to Mr. J. J. Cox, of Melbourne, and she resided with her husband and mother until her death.