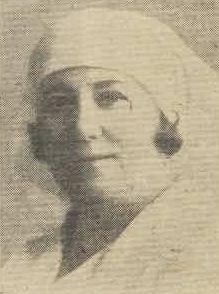 "THE GREY BATTALION." by May Tilton
published by Angus and Robertson, Sydney;
310 pages, 6/-.

Australians everywhere owe a good deal to Messrs. Angus and Robertson for the special manner in
which they are producing books of real Australian interest. Their books on the war, from various
angles, have captivated the real reading public, and now comes another very excellent book, telling
of the war from the pen of a hospital sister.

Field-Marhal Sir W. R. Birdwood, popularly known among the Australians as "Birdie," in his foreword, says:-"I have read with great interest Miss Tilton's vivid description of her war reminiscences. " They
recall to memory recollections of the" devotion to duty shown by our Army Nursing Service
throughout many different theatres of war - a devotion that, sustained and uplifted our men
through many dark and difficult days. It carries through its pages a sense of privilege felt at being
able to give such splendid support to our men -a sense which, in spite of hardship endured, enabled Miss Tilton and those associated with her to carry on with courage to the end, and gain experiences which I know they are proud to remember. I feel sure this book will make a wide appeal to numerous readers, and I wish It every success."

(CONDOLENCES of district friends are extended to Mr. J. C. Timms, of Kurrajong, in the loss of his eldest sister, Miss Mary Charlotte Timms, who passed away at her residence at Rockdale on August 9, in her 75th year. A native of the Robertson district, deceased trained at the Coast Hospital for the nursing profession, serving as a nurse in various parts of N.S.W., Queensland and New Zealand before volunteering from South Africa for service in World War I. As a member of Queen Alexandra's Nursing Corps she served for nearly four years in France and Belgium, being one of the survivors from a bombed casualty station on one occasion, and on her return was matron of the Byron Hospital at Bangalow, on the Richmond River, for some years.  After her retirement she did a great deal of work for the N.E.S. and other organisations in World War II, and the Rockdale branch of the
R.S.L. provided a fitting tribute in a guard of honour and a special wreath at the funeral, which moved to the Woronora Crematorium after a service in St. John's, Rochdale, on August 11.

Sister Mary C. Timms died suddenly at her residence, Rockdale Sydney. She was born in the Robertson district and while living at Borry with her parents, the late Mr. and Mrs. J. W. Timms, decided to take up nursing, in which profession she served in N. S. W., Queensland, 'New Zealand and South Africa. She enlisted from South Africa in the first World War and, in England, joined the Queen Alexandra Nursing Corps.  She served for four years in France and Belgium. She held four military decorations.

Sister Timms was buried at Rockdale. Rockdale branch of the R.S.L. accorded her a military funeral. The Council of the Municipality of Rockdale have placed on record its appreciation of her work and service.

She is survived by five brothers and four sisters. Brothers include Charles (Pearce's Creek) and Richard (Nashua). Among her sisters are Mrs. A. J. Kirkland (Ballina;and Mrs. F. Dawes and Mrs. D.Gilmore (Tweed River).

TIMMS -The Relatives and Friends of the late MARY CHARLOTTE TIMMS of 4 Bestie Street Rockdale are Invited to attend her Funeral which will leave St John s Church of England Prince s Highway Rockdale Tomorrow (Thursday) Morning alter benlee commencing at 9.30 o’clock for the Crematorium Woronora.