Matron J. Sinclair Wood, of  the Hutt-street Private Hospital, sister of the secretary of the Pastoralists' Association of West Darling (Mr. C. Sinclair Wood), who has been selected, as South Australian representative in the  wartime" nurses section of the coronation contingent was matron of the Broken Hill District Hospital about 16 years ago.
She has been principal matron, 4th Military District, South Australia, since June 1927.  She is also vice-president of the Returned Army Sisters' Association.
Miss Wood, who is a trainee of Adelaide Hospital, enlisted in the Army., Nursing Service, on September 21, 1914 and left for active service a week later in the Kyarra.  She was in Egypt for a while and afterwards served, for about a year in the hospital ship Formosa, operating in the Mediterranean. The vessel evacuated many wounded Australians from Gallipoli.

Work in military hospitals in England came as a welcome change, but after a few weeks Sister Wood ' was sent to France, where she served in casualty clearing stations, which were often only tents, well within, range of enemy artillery fire, up to the armistice.
In her service, which extended until demobilisation in June, 1919, Sister Wood had only one week's sick leave. That was due to a frozen toe in the rigor of the French winter of 1917.  When interviewed, Matron Wood  said that she was delighted at the prospect of revisiting England, where she had relatives. Her trip, however, would be only a short one-less than six months.
She dismissed her war service with the remark that her duties and risks were the same, as shared by other nurses.  She recalled that her casualty clearing station near Poperinghe was shelled on one occasion, creating confusion. The hospital had to be evacuated.
After her return from the war, in February, 1919, Matron Wood was attached to Keswick Military Hospital staff for several months.
On demobilisation she went to Broken Hill. She was afterwards matron of Burra and Ru Rua (North Adelaide) hospitals. She took over Hutt-street Private Hospital about 11 years ago.
In recognition of her army nursing work, Matron Wood was awarded the Jubilee Medal.

Barrier Miner Tuesday 09 February 1937 page 3
Sister J. Sinclair-Wood, who served throughout the war, and who went to England with the coronation contingent last year, did not take her usual place at the head of the nurses' procession.  On Hospital Ship for the first year of her war service she was a sister, together with nine others; on board a hospital transport ship, which travelled from Lemnos to Egypt and Naples, and often back to England; with wounded and sick soldiers.  She was stationed in Egypt at the time of the landing at Gallopoli, and her first experience of hospital transport work was in taking, away the wounded from there."Our ship was supposed to be able to hold 250 patients," she said, "but we used to get on board sometimes between 700 and 800 by installing the less sick ones on deck on mattresses.  Life on the sea in those days was fraught with danger, and there were often warnings of enemy craft nearby.  They frequently received S.O.S. messages from doomed ships, but were never close enough to go to their rescue. Subsequently the hospital ships had to travel in darkness, because the Red Cross did not enjoy immunity. Sister Sinclair-Wood later went  to France where she remained for the rest of the war. 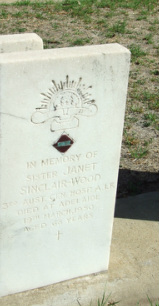 One of the most distinguished figures in the Australian nursing world, her services to the profession were outstanding. She was held in high esteem by nurses who were associated with her through-out her long
career of civilian and military nursing.

An examiner for the S.A. Nursing Board for many years, Miss Sinclair-Wood was a member of the Council
of the Australian Trained Nurses' Association.

She served with distinction in both world wars. In the period between the two wars Miss Sinclair-Wood was principal matron of the AMP,. on the reserve"

She was chosen as the representative nurse from South Australia to accompany the Australian military group which went to England to attend the coronation of King George VI. and Queen Elisabeth in May 1937.

With the outbreak of the second World War, Miss Sinclair-Wood organised the voluntary nursing service at Woodside Camp. Later as principal matron of the 4th military district, she was in charge of nursing services at all military camps in South Australia.

In 1949 she was appointed Matron-in-Chief of the Australian Military Forces.  She received the rank of colonel and was stationed at Headquarters, Victoria. She retired from that post in 1943.

Later Miss Sinclair-Wood acted on the nursing division of the Department of Labor and National Service and was a member of the Red Cross Hospitals war effort.

Former secretary of the Broken Hill Pastoralists' Protection Board. Mr. C. Sinclair-Wood, now of Adelaide, is a brother to the late Miss Sinclair-Wood, and Mrs. T.A. F. Davoren is a niece).

Nurse Laurie Wood, who sold her private hospital at Guildford (W.A.), in order to offer her  services for the war, leaves for the  Continent on the 20th under the French Flag Nursing Corps.
Electoral rolls list as Laura Florence Wood and is a matron of Guildford Private Hospital.
She disappears from the Australian Electoral Rolls in 1924.
There is a passenger sailing from Durban 27/9/1926 to England named Laurie Florence Wood who is a nurse
Seems to be travelling from Durban  to England.  Looks like she travelled with  Morris Green (Company Director of the Standard Bank of South Africa) his wife and children as the London address is the same-63 London Wall, London.
Nurse Laurie has just arrived from Western Australia by the Osterley (says the latest 'British Australasian'), having given up her private hospital at Guildford, Perth, in order to offer her services to the War Office.

Born 07 March 1886 in Bega, NSW
Daughter of Walter WOODE and Alice COOKE nee UNSWORTH
Of 'Silwood' The Boulevard, Strathfield, NSW
Occupation prior to enlisting Masseuse
Enlisted 18 August 1915
Embarked 21 August 1915 from Sydney per ‘Morea’
Aged 29 years
Served in England
10th Australian General Hospital
Returned to Australia per Marathon on nursing Staff 24 September 1916
Appointment Terminated 13 October 1916
Married Cliffored MILLER on 16 September 1922 in Santiago, Chile
Became a permanent resident of Chile
Was a passenger on ship Chile to England in 1956 and was to stay in England for two months.
​No further information
If our grandmothers could come back for a brief spell, as happened In "The Blue Bird," wouldn't there be a rubbing of eyes at the, manner of the modern girl's conduct of her life. Miss To-day thinks nothing of rushing half over the earth and back again without bothering with that Victorian ogre, the chaperone. The latest to be permitted to pack her frocks and furbelows is Miss Joan Woodd. She's really attached to the military as a masseuse, having done splendid work abroad. Father happens at present to be in Chill. So Miss Joan is being permitted to be demobilised pro tern to pay him a dutiful visit.  The journeying Is going to take time and money, because routes these times are circuitous. The sick boys at George's Heights are going to miss her, as she has been "a Jolly fine girl all right." and her clever hands have brought relief to many a weary nerve-wracked sufferer. 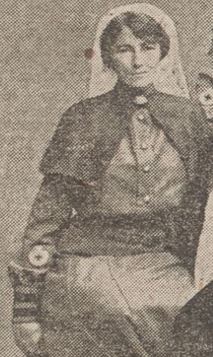 Sister M Woods, daughter of Mr. and Mrs. Wm. Woods, of Woodpark, Moree, has been awarded the Royal Red Cross.  Sister Woods has been on active service for over four years.

The death occurred at a private hospital yesterday, of Mrs. W. J. Foster, wife of Colonel Foster.  Mrs. Foster will be remembered as Sister M. Woods, R.R.C., eldest daughter of Mr. and Mrs. Woods, of Wood Park, Moree.  She served with the A.I.F. in Egypt and England, and saw five years active service.  Colonel Foster is at present in England, but is to leave by the Osterley next month for Australia.

Born 1877 in Parramatta, NSW
Daughter of John WORRALL and Caroline nee CRESSWELL
Embarked from Australia 04 April 1915
Disembarked Suez 02 May 1915
Served 04 April 1915 to 28 December 1919
Served at the No 17 British General Hospital (Victoria College) Alexandria, Egypt from 04 May 1915 then at the Military Infectious Hospital, Choubra, Cairo as Sister and Home Sister.
In England attached to the R V Hospital, Netley as Home Sister, at 'Hamble House' (relieving) and the 'Huts' respectively and later was appointed Sister in Charge of the Ambulance Trains at Southampton, which position she held until demobilised in December 1919
Embarked for Australia per 'Aeneas' 23 November 1919
Address on discharge c/- H WORRALL Esq. 'Chester' Meredith Street, Homebush, Sydney, NSW
Married William  GOW on her return to Australia in 1920 in NSW
Resided 'Choubra' Cowra Road, Forbes, NSW
Resided 11 Frederick Street, Oatley, Sydney, NSW in 1938
Died 10 May 1956 in RGH, Concord, NSW
Powered by