The death occurred in Brisbane on 23rd June of Mrs. Alice Devine, wife of Mr. C. Devine, Megine, Roma.  She had been in ill-health for some time.  Mrs. Devine was a daughter of the late Mr. William Webb, and was born at Beaudesert.  She served as a nurse in the war 1914-18 for 3 1/2 years, most overseas with the A1F.  She was married to Mr. Charles Devine, who also served with the AIF in the last war, and member of a well-known grazing family in the Surat district, in 1922, and with her husband went to a property in the Central district. Mr. and Mrs. Devine have resided at Megine since his purchase of the property in 1937.

Awarded Royal Red Cross 2nd Class
Date of Commonwealth of Australia Gazette: 7 November 1918
Location in Commonwealth of Australia Gazette: Page 2111, position 129
Date of London Gazette: 3 June 1918
Location in London Gazette: Page 6476, position 1
On New Year's Day Nurse Dorothy Webb returned to Brisbane after 3 1/2 years service at the fronts in France. She carries with her the coveted decoration of the Royal Red Cross- the Victoria Cross of the nurses in wartime. Nurse Dorothy was born in Blackall. Her elder brother was wounded at Gallipoli and sent home to Queensland where he has put in some time as sergeant and lieutenant on the recruiting staff at Gladstone and Rockhampton. His three brothers are still in France. 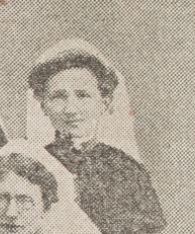 Miss Sylvia Weigall has been appointed matron of the Barnardo Home, New South Wales branch. Sister Weigall, who was five years on active service with the A.A.N.S, and secretary to the Returned Army Sisters' Association, is a daughter of the late chief of the Svdney Grammar School, Mr. A. B. Weigall.  The first batch of Barnardo boys will be leaving England on August 25, by the Berrima, and should arrive here about October 18 or 20. Miss Weigall is looking forward to her work amongst them with the happiest anticipation, and, judging from the popularity Miss Weigall enjoyed amongst the digger "boys" at the front, there is little doubt that the committee has chosen very wisely.

Born c 1893 as Gwenneth Annetta WELCH
Daughter of John/James and Ada Florida WELCH
Married Hector James McKAY 21 June 1918 in Glasgow, Scotland
Returned to Australia 1919 per 'Konigin Luise' with her husband
​Died 19 January 1920 (result of gas) at Colac West, Vic.
​Aged 27 years
Buried Colac Cemetery CLC-PRES-15-807-15
Mrs. H. J. McKay (Sister Nettie Welch).  The deceased lady was early in the war attached as a nurse to the British Imperial Forces, and was subsequently transferred to the Australian Forces. She served for more than four years, and for some of the time was on hospital ships travelling between Egypt and France, and was on the Princess Dover when that vessel was torpedoed. With the captain, the deceased lady was the last to leave the steamer, and after having been on a raft for four hours was picked up by a Dutch ship and taken to Rotterdam. She nursed her husband back to health when he was a casualty on active service. Mrs. McKay was a native of Melbourne.

Emmeline Wellard was born in North-West Tasmania in 1877. She was one of nine children. Emmeline eventually moved to Launceston and began training as a nurse.

Emmeline trained at both the Queen Victoria Hospital for Women and the Launceston General Hospital, qualifying with first class honours in 1906.

In 1916, Emmeline enlisted in the Australian Army Nursing Service and set sail for India. She was posted to British hospitals in Bombay and Deolali, caring for wounded soldiers from the campaigns in the Middle East.

In 1918, Emmeline was one of five Australian nurses posted to the British hospital at Bushire, Persia. This was a 150 bed hospital and was the only one near the Mesopotamia front staffed by Australian nurses. Conditions were harsh and difficult, with severe dust storms lasting days, intense heat and sometimes torrential rain.

These nurses had little time for breaks from work with convoys of sick and injured soldiers. As well as war injuries, soldiers suffered from many diseases such as malaria, cholera and smallpox. It was at Bushire that she was Mentioned in Despatches for her service.

On her way home, in May 1919, Emmeline volunteered to serve in the North-West Frontier region of India, just as the Afghan tribes began a revolt against British rule. Only seven Australian nurses served in what became known as the Third Afghan War.

Emmeline was commended for her “gallant and distinguished services in the field” and was awarded the Royal Red Cross, an imperial decoration received by only a few Tasmanian nurses. She also received the British War Medal, Victory Medal, British General Service Medal and the India General Service Medal. Emmeline was one of the most highly awarded Tasmanian nurses to serve in the Great War. She returned to nursing in Tasmania and died in Ulverstone on 29 July 1956.

Nurses Kirkaldie and Wellmann, of Sydney, left for England by the steamer Ballarat, "which sailed from the Outer Harbor yesterday. They hope to be sent to the front, their experience of war nursing, which they received on the Grantala, has by no means satisfied them, and they are longing for still harder work.

News has been received by Mr. E. M, West, of Belmont-road, Mosman, that his daughter, Sister A. E. Major-West
has been awarded the Royal Red Cross for distinguished services at Salonika. Sister West left on June 9 1917 by the Mooltan with the first 800 Australian nurses to go to Salonika. She was trained at the Royal Prince Alfred Hospital, Camperdown, and prior to leaving for the Front, was for seven years matron of the Nepean Cottage Hospital, Penrith.  Sister West Is at present at Sutton Veny Hospital, England, and expects to leave for Australia in the course of a few weeks.