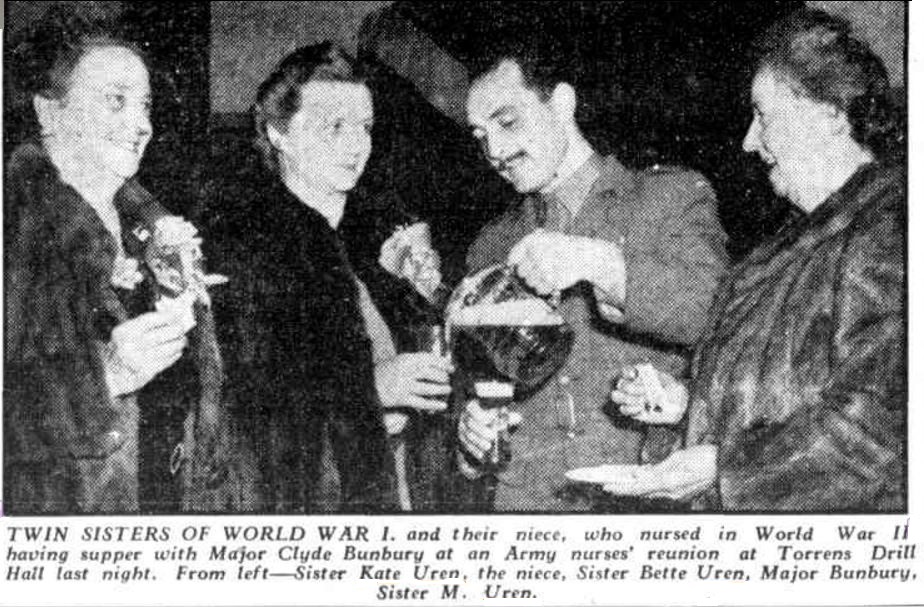 Matron E. R. Uren, who has been awarded the Royal Red Cross Medal for services at Salonika, has for some years conducted the Narma Nursing Home, South-terrace. She has been connected with the Australian Army  Nursing Service Reserve since it was formed in 1904,and in 1915 was appointed principal matron for the 4th (South Australian) Military District. Holding that position until 1917, she embarked with the A.I.F. for India, but was recalled to join the nursing staff organised in Sydney for service at Salonika. With about 300 other nurses she travelled from Sydney to Adelaide, and embarked, being in charge of No. 3 unit of 91 nurses. A fourth unit of nurses was dispatched later, chiefly as reinforcements. Those Australian nurses staffed four Imperial General Canvas Tent Hospitals, each containing 1,560 beds, at Salonika, Sister Uren being matron-in-charge of the 60th General Hospital for 13 months. Then, owing to urgent private business, she was granted leave, and returned to Adelaide on October 6 last. When the armistice was signed Matron Uren was placed on there serve again. She considers herself fortunate in having gone through the campaign without falling ill as at Salonika there was much sickness among the nursing staff, owing to malaria and dysentery.  On her way to Salonika the matron and the other Australian nurses volunteered for hospital service at Alexandria during the three weeks that the transport was held up at Port Said, and their services were appreciated.

Chronicle Saturday 11 January 1919 page 31
Sister E. Uren, of the Narma Hospital, South terrace, Adelaide, has just received an unusual decoration. She holds the grade of Honorary Serving Sister to the Grand Prior of the Order of the Hospital of St John of Jerusalem in England. The token of the order is of black enamel, with a silver band and white cross, and has a black ribbon. Sister Uren first served as a military sister in 1901, when the Commonwealth Army Nursing Society was formed. She left for active service in the Great War in May 1917, when she was appointed matron of the 60th General Hospital at Salonika. Sister Uren was trained at the Adelaide Hospital, and afterwards went to Glasgow, where she obtained the highest possible certificates in her profession. She has also received the Royal Red Cross, which is a reward for having tended sick and wounded soldiers and sailors with conspicuous devotion.

Sister Ethel Uren, who now lives at Stirling, was in charge of the detachment of nurses at Salonika. Soon after they arrived the town was swept by fire, food ships were torpedoed, and there was shortage of supplies.  Another night, when there was an air raid, the nurses refused to go into the dug-outs, but waited outside in the open and watched, solemnly holding enamel wash-basins on their heads as protection. A piece of shrapnel fell a few feet from them, and Sister Uren promptly seized it and burnt her fingers. But she brought it home as a souvenir. 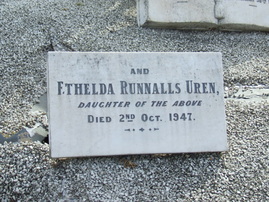 Matron Ethel Uren one of South Australia's best-known and loved World War I sisters, she
holds both the Royal Red Cross and the Order of St. John of Jerusalem-had a delightful
surprise party on her birthday.Thirty old friends wished her many happy returns, at the
home of her sisters. Sisters Kate and M. Uren, St. Peters. Tea was served outdoors, where Matron Uren cut her birthday cake. Congratulatory speeches were made by
her niece, Sister E. R. Uren, World War II nurse, and others and Mrs. Edward Reeves
recited. Melbourne visitors at the party included former Army sisters Mrs.Alan Walker,
Mrs. Cliff Taylor and Miss Hook. Several serving members of the Australian Army Nursing
Service were among those present.