Miss Laura Pratt one of the Melbourne nurses, who was awarded the Royal Red Cross in the Birthday honours. She is the daughter of Mr. James Pratt, Glen Forbes, Gippsland. 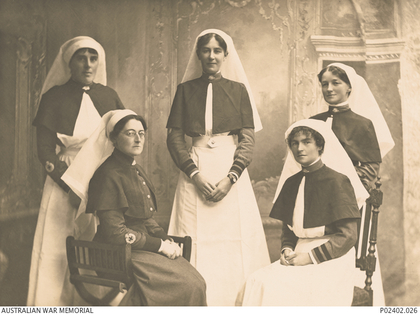 On 1 July 1917, 1ACCS was attacked from the air, with a bomb landing close to where Sister Pratt was nursing a patient. Shrapnel from the bomb burst through the tent, tearing into her back and shoulder and puncturing her lung. After the attack she worked on as best she could but eventually collapsed and was evacuated to Britain for treatment and convalescence. She was promoted to sister and awarded the Military Medal “for conspicuous gallantry displayed in the performance of her duties”. She returned to duty and nursed until the end of the war, returning home with a piece of shrapnel in her lung, which caused her to suffer from chronic bronchitis for the rest of her life.

She was awarded her Military Medal for "bravery in the field" on 19 October 1917, one of seven nurses to receive this award during the First World War. After recuperating in England, Sister Pratt served with the 2nd Australian Convalescent Depot at Weymouth, England and then the 1st and 2nd Australian Auxiliary Hospitals. Sister Pratt returned to Australia on 24 August 1918.

In 1927 she established in partnership, a rest home at East Malvern, Melbourne.  Sold in the mid 1930's.  Went to England in 1937 for a holiday and on her return lived at a hotel.  She eventually bought a house at Uwey and lived there until her death.

Matron Alice Prichard, formerly of Mildura is expected to leave for the front this week.  The Border Morning Mail (Albury) has a record as follows:"Miss A H  Prichard, matron of the Albury Hospital, has placed her service at the disposal of her country and tendered her appointment as a sister to go to the front with the Army Nursing Corps of an Australian Imperial Force.  Miss Prichard has tendered her resignation as matron of the Albury Hospital.  The people of Albury and surrouding districts, her many friends particularly, will laud her patriotic spirit and action, and wish her a safe return to the sunny skies of Australia in the tranquil days to come.

Miss Alice Prichard, another daughter, who was matron at Alfred Hospital, has arrived at Adelaide on return. Miss Alice Prichard was made a first-class Royal Red Cross nurse during her service at Salonika, and has many and varied experiences.

Return of War Nurses.— Miss Florrie Prichard, daughter of Mrs, Prlchard, of 'Greenvale,' Glenrowan, returned from the war by the Derbyshire last week. Prior to enlisting for service she was matron of Corowa Hospital.

BROKEN HILL, Friday.
Miss Florence Mary Prichard has been appointed matron of the hospital. There were 15 applications. Miss Prichard was trained at the Alfred Hospital, Melbourne, and her qualifications include six years matron at Corowa Hospital, two years at Hay, one at Zeehon, and two and a quarter years at Devon Hospital

The many friends of Sister Muriel Friday will regret to learn of her sudden death, which took place on Monday at her home at Yarra-grove, Hawthorn.  Sister Friday, who served ruing the war had been for many years in charge of the nursing work of the Repatriation department St. Kilda Road, where her good and conscientious work won for her the cordial appreciation of the doctors of the staff and many friends amongst the soldiers.

The first South Australian nurse to volunteer for active service in 1914, Miss F. E.Pritchard, who died recently,
devoted 23 years of her life to the care of sick soldiers, particularly TB sufferers. She was a good friend, too, to daughters of deceased soldiers and it was mainly because of her efforts that the party given every year to Legacy girls by the Returned Sisters' sub-branch of the RSL was begun years ago.  The late Miss Pritchard served with the AANS in Egypt, England, France and India during World War 1 and after the Armistice returned to Adelaide and joined the staff of the 7th AGH. Later she was transferred to the Myrtle Bank Hospital, of which she was matron for six years.  A keen worker for the Returned Sisters' sub-branch of the RSL, the late Miss Pritchard was on the executive for years and was a past president and convener of the social committee. After her retirement from active nursing she continued her interest in ex-service personnel, but for some years she had been in ill-health.

The death occurred in Melbourne on Saturday on Nurse Sarah Jane Proctor aged about 75 years.  Nurse Proctor was very well known in Wagga and resided here until the 1914-18 war when she went overseas with the forces as a matron.  She performed outstanding work during the period of that war and her services were later recognised by the authorities.  Nurse Proctor who was born at Stawell (V) was a daughter of the later Mr. and Mrs. C.F. Proctor, and in late years resided in Melbourne.  Messres Arthur Proctor (Yerong Creek) and Stan Proctor (Milbrulong) are brothers. News of the death of Nurse Proctor will be received with deep regret by many residents of the district who remember this outstanding personality during her residence in Wagga.  The funeral is to take place in Melbourne today.

Returned to Austrlaia per 'Ulysses' on duty 05 February 1916
Appointment terminated 03 May 1919
Resided at 39 Blythe Street, East Brunswick Vic. in 1919
Some correspondence on army file refer as Sarah Jane PROCTER