'Your qualifications as a nurse must include - Gentleness, Cleanliness, Truthfulness, Observation, Order, Courage, Coolness, and Tact'
​Reveille, Volume 3 Number 11 July 31, 1930
Our Nurses: Valiant Work In this article, Miss Evelyn A. Conyers, R.R.C. and Bar, O.B.E., and Florence Nightingale Medallist, who sailed with the first contingent of the A.I.F., as a sister of the A.A.N.S., and was promoted in the field to the position of Matron-in-Chief, records the valiant work of the 2,000 Digger nurses, who served in Egypt, England, India, France, Lemnos and Salonica.
When the Australian Army Nursing Service was inaugurated in 1903, there was a personnel ot a Lady Superintendent and Matron in each State; 24 Nursing Sisters in New South Wales and Victoria, and a fewer number in the smaller States. War was undreamed of. Hundreds of applications were received for these positions, and the privileged few selected, held themselves in readiness to be called out in any national emergency. A capitation allowance of £l per annum was paid to each member of the service. Members provided their own uniforms. Four parades were held annually and attendance was compulsory. The years passed, and when on Aug. 4, 1914, war was declared, Australia had a permanent Military Nursing Service on which to call. With the First Expeditionary Force that sailed in October, 1914, were a Principal matron, three matrons, and 20 sisters drawn from all States, and representing the senior members of the Nursing Staffs of No. 1 and No. 2 Australian General Hospitals. The permanent Military Nursing Service was supplemented by hundreds of volunteers, 2,000 in all going overseas during the war. The seven and a half weeks journey from Australia to Alexandria was a busy time for the sisters on the transports. Some of the Military troops required immediate and other operations, vaccinations against small pox, and inoculations against typhoid and para-typhoid. The hospital was very busy. On some transports, measles broke out, and a nurse’s life was a very strenuous one. In the convoy were ships from Australia and 10 from New Zealand. Drawn up in three divisions and with two cable lengths between each boat, the convoy extended for five miles; led by the British cruiser Minatour; the cruiser Sydney on the port side; and Japanese cruiser Ibouki to starboard; while the cruiser Hampshire brought to the rear. The pace had to be that of the slowest boat, which carried horses and about 70 men, as the Emden was on the look out for the convoy. In perfect weather the convoy journeyed on.  In the early hours one morning a collision occurred between two of the transports, but no serious damage was done. On the boat carrying the divisional artillery were 700 men under Colonel, now General Sir Talbot Hobbs of W.A.; and 450 horses which were located on five decks. A matron and two sisters were carried on this boat.
On arrival in Alexandria, on Dec. 5, 1914, the Nursing Staff was sent to Cairo—some for urgent duty in the Egyptian Army Hospital, Abbassia, which had been lent for troops from New Zealand. The Arab soldier patients had been transferred to their isolation hospital buildings at the rear. Other members of the Nursing Service were located at Mena House, near the Pyramids; and there, on the desert, Australian troops were encamped. Early in 1915 the Kyarra arrived at Alexandria with the remaining nursing staff of No. 1 and No. 2 Australian General Hospitals, and all necessary equipment for each. No. 1 were stationed in an hotel at Heliopolis, where a special suite intended for the use of the King of the Belgians, made a splendid operating room. No. 2, Australian General Hospital, remained at Mena House until transferred later to Ghezira Palace, Cairo. In April, 1915, the troops sailed from Egypt for Parts unknown. Some days passed while the hospitals were kept busy with medical and surgical patients. Auxiliary hospitals were opened Up at Luna Park, the Atelier, and later at the Sporting Club, Heliopolis. Both in Cairo and Alexandria numbers of buildings were taken and converted into hospitals by the British authorities. Then, the wounded began to arrive—by hospital trains from Alexandria—stretcher and walking cases'—after the famous landing at Gallipoli. At Luna Park the floor of the skating rink held 700 bedsteads. The sisters from adjacent hospitals visited the men, so many were mere boys, and it eased their minds to talk to us of the horrors through which they had so recently passed. None of us at that time had the faintest conception of what war (as we now know it) meant. At the outbreak, there were only four hospitals in Cairo, military and civil, and fewer in Alexandria. In both places many buildings were commandeered and equipped as hospitals and convalescent hospitals. Thousands of sick and wounded men from all kinds of regiments were sent by transports to Alexandria, and as the hospitals there filled—hospital trains brought the men to Cairo. At any hour of the day or night a convoy of, say 250 wounded men, would arrive. If, at night, the day staff would be called, and on arrival at the hospital the men were given hot drinks and Speedily got into bed. Necessary surgical dressings would be changed, and immediate operations performed. An Egyptian summer is a trying experience to those unaccustomed to it. Prior to the war, English women took a siesta from noon to 4 p.m. Ali through the busy days of 1915 the sisters worked unceasingly, and, in some instances, for twelve hours each day, until the arrival of reinforcements eased the situation.

The initiative and unfailing devotion to duty of the sisters were frequently commented on. The work of the sisters on transports to Gallipoli was sad and anxious. The wounded were brought on board from barges and received immediate attention. Minor operations were performed and dressings changed. A speedy run was made to Alexandria, and on dis-embarkation the men were sent to hospitals in Alexandria, or by hospital train to Cairo. Leading surgeons from many places worked unceasingly. The year, 1915 was drawing to a close. No. 3 Australian General Hospital had been stationed tvith British Hospitals on Lemnos Island in the Aegean Sea, and wounded and sick men were sent there. The island of Malta was crowded with sick and wounded men. Some Australian nurses had enlisted in England working there. The evacuation from Gallipoli in December, 1915, freed the Australian troops, and early in 1916 they were transferred to France. The Camel Corps remained in Egypt. and  No. 3 Australian General Hospital, on arriving in Cairo, was stationed at Abbassia. No. 1 and No. 2 General Hospitals with full equipment were transferred to France. The former was located on the racecourse at Rouen, with several British hospitals; and the latter, after a short stay at Marseilles, was sent to Wimmereaux, where it remained until the Armistice.

Upon the arrival of No. 14 Australian General Hospital in Cairo, No. 3 A.G.H. Was then sent to England and accommodated in the Kitchener War Hospital at Brighton. Some time later this unit Was transferred to Abbeville. After the heat of over twelve months in Cairo the Nursing Staff of No. 1 and No. 2 General Hospitals faced one of the coldest winters ever experienced in France. Living in tents and unlined wooden huts the cold was felt acutely.  All took things most cheerfully, however. Underfoot, mud and water necessitated the wearing of gum boots, but the duckboards were a great asset for keeping boots dry and clean. The spring brought a welcome change, and looking over the adjacent fields wild flowers lifted their heads, and later the poppies were in profusion. Poppies and gunfire—those two will be always associated together in my mind. Nine units staffed by Australians were scattered over French soil, including three casualty clearing stations located as near to the firing line as safety permitted. From the field ambulances the men were brought for resuscitation, operation, surgical dressings, or to bring ease and comfort to them in their last hours. The sisters had gone from Australia to do their best for the fighting men,  and they gave of their health and strength without stint. Many denied themselves of little personal comforts that such might be bestowed on those wounded and broken by the cruel ravages of war. The casualty clearing stations, on which at any moment the shells shrieking might have landed, causing death and destruction, were nerve trying places. Our guns, close by, shook the ground with the force of their firing. In fact, when all gunfire ceased, as it did on occasions, the unusual silence immediately awakened those resting. Overhead the observation balloons floated, their occupants ever on the water for the movements of the enemy. Air raids were frequent. Sisters and others on duty remained at their posts. The hospital train, with medical men, sisters, and orderlies, with the bunks running the full length of the coaches, was a veritable hospital on wheels. When fit, all men were transferred from the casualty clearing stations to the Base Hospitals, some immediately after operation; others having to be detained a few hours or days. Those fit for a journey, travelled by ambulance from the hospital train at the Base to the waiting ships in the docks. Two boats, usually travelling together, accompanied by a destroyer, zig-zagged across channel to Folkstone, where a hospital train conveyed them speedily to London. During air raids on casualty clearing stations two Australian sisters were wounded. In one instance, while a raid was on, a Padre entered a hut and found the sister on duty encouraging her patients "to stick it.” She had given each man an enamel wash hand basin as a head covering, and by her coolness and courage enabled them to face things quietly. For her bravery in the field she was awarded the Military Medal. The wounded sisters also received this honour. The staff of a casualty clearing station were constantly under fire. Their presence in this danger zone, was well repaid by the greatly increased number of lives saved by the prompt skilled attention and care, that can only be given by a highly trained and efficient nurse.

SURGICAL TEAMS.
​
Every sister would have given her Services at a casualty clearing station had it been necessary. The work there involved great mental and physical strain, and every precaution was taken to safeguard the health and well being of all those working under such conditions. Surgical teams, each with a sister, were drawn from the Base hospitals, and the staff of a casualty clearing station was supplemented by one or more. Operative work  was carried on continuously for many hours, following an enemy attack. On completion, the teams were transferred by ambulance to any casualty clearing station requiring extra help. The value of such speedy treatment of the wounded was inestimable. As in the casualty clearing stations, so in all hospitals in France, the patients and staff were never free from the risk of death or injury by bombs. Submarines were very busy in some places. The Barunga was sunk by a torpedo a few hours out from the port of embarkation. There were no casualties, and all on board were speedily returned to the port of embarkation. The members of the Nursing Service served in Egypt, England, India, France, Lemnos, and Salonica. Of the two thousand members who went overseas, thirteen paid the supreme sacriflce, ten of whom were Victorians; and of 130 sent from Australia for service with Queen Alexandria's imperial Military Nursing Service Reserve, three gave their lives. "Their names liveth for evermore." Of those who remain, a bond unites them, growing stronger with the passing of the years.
More than 2,139 Sisters served abroad
Over 900 served in Australia
130 transferred from the AANS to the Queen Alexandra's Imperial Military Service Reserve
21 AANS Died on Active Service
4 QAIMNSR died Overeseas
4 AANS died in Australia before discharge
388 AANS were decorated

To serve with the AANS at least three year's service was required in Medical and Surgical Nursing in a recognised Hospital
and nurses were to be aged between 21 and 45 years.
They were to be either single women or widowed. 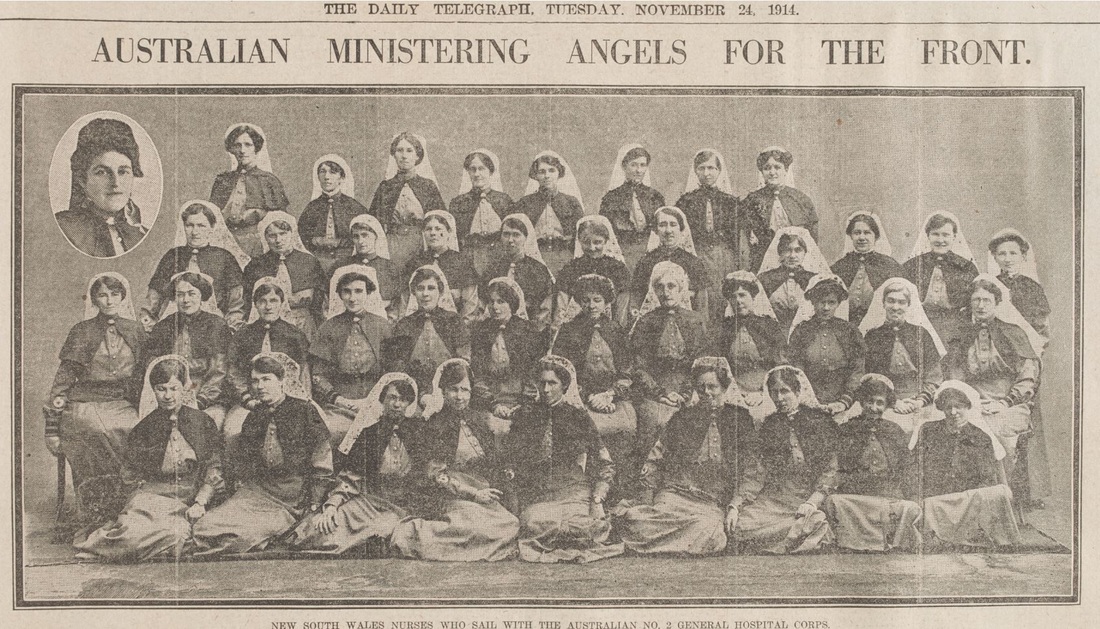