The death occurred on Friday last of a well known and highly respected resident in the person of Miss Agnes May Semple, after a short illness. The late Miss Semple was a daughter of the late Dr. and Mrs. W. H. Semple, of Kilmore, and had spent. the greater portion of her life in the town. A trained nurse, the deceased served overseas with the Australian Army' Nursing Service during the 1914-18 war and on her return to Australia she carried on with her nursing career, and always retained a very keen interest in the welfare of 1914-18 Diggers. The late Miss Semple took an active interest in her Church and local organisations for some years until failing health prevented her active association in such.  She is survived by one sister (Mrs. J. J. Ryan, Kilmore). A sister (Mary) and brother (Dr.John Semple) predeceased her. The interment was made in the Kilmore General Cemetery on Monday after a service at Christ Church, Kilmore, and the funeral was attended by many old friends and former service members of the two World Wars. The services at the Church and graveside were conducted by the Rev. G. Smith Grey and the R.S.L. Service was read by Mr. L. V. Smith. The Last Post and Reveille was sounded by Mr. R. J. Glanville and ex-servicemen of the two World Wars were the pallbearers.

OWEN -SEULING. —On the 3rd December, 1924, at Canterbury Presbyterian Church, by the Rev. J. A. Forrest, Ernest Ramsay, second son of the late Mr and Mrs. Robert Owen, to Irene Ethel, second daughter of Mrs and the late Henry Seuling. 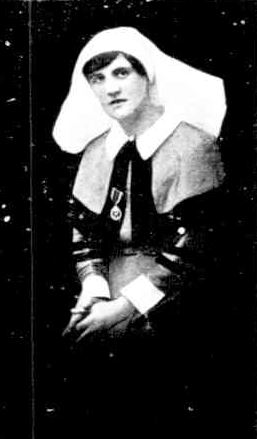 Born 07 November 1885 in Qld
Daughter of William SEXTON and Florence Susan nee BRIGG
Did not marry
Died 02 May 1970 in Vic.
​Late of Canterbury, Vic.
Cremated Springvale Botanical Cemetery 05 May 1970
​
NURSE ON SERVICE.

According to the "Toowoomba Chronicle," Sister Dora Sexton, of the Royal A.M.C., recently
applied and has been accepted. She is now for transport duties at the front  on the transport
ship Galetta which conveys the wounded soldiers to the various hospitals. The nurses'
duties in this sphere are to take in the wounded from the firing line and although this
seems extremely dangerous, Sister Sexton's bravery cannot, be too highly spoken of.
In  her letter Sister Sexton says they carry as many as 600 wounded on the transport,
and as they take them into the different hospitals she has an opportunity of seeing
many of the Australian men. Sister Sexton received a visit from Sisters Campbell and
Heffernan when at Cairo. They were on a few weeks' leave, and she also stated she
sees all the Australian boys as they land. It should be added that Sister Sexton is a
sister of Mr. Sexton, of Cairns, and was one of the twenty-six who were selected with
Matron MacDonnell.

SISTER DORA SEXTON
'ONE OF THE WOMEN BEHIND THE GUNS'

Wearing a pretty grey uniform, the cape bound with scarlet, two scarlet lines round the sleeve, and a shady grey felt hat with a red-white-and-blue band, soft muslin collar and cuffs, Sister Dora Sexton has been an unusual and picturesque figure in Toowoomba streets during the past few weeks.  After three years' continuous service with Queen Alexandria's Imperial Military Nursing Service Reserve, Sister Dora obtained furlough owing to her father's illness, and is now awaiting a transport to return to duty. ' Looking at this valiant young Australian as she sits in a big chair in a sunny corner of the verandah, it is difficult to realise that so small a person could have accomplished what she has done since the outbreak of war, for it is not so very many years ago that she was a probationer in the Toowoomba General Hospital.  One of the first to offer her services, her destination at first was the 15th General Hospital at Alexandria. Then came transport work on a hospital ship to and from the Dardanelles, taking part in the Suvla Bay landing and the evacuation, two trips to England, taking in Malta and Gallipoli, and then hospital work at Malta.  Malta, Sister Dora describes as a 'gorgeous little spot,' of which she has hosts of pleasant memories, and many mementos in the way of snapshots of bathing parties' and picnics when 'off duty.  ''The Italian opera, too, was a joy.''Then came Salonika, where I have been for the last eight months. We were up in the hills, and, you know, there really isn't any Salonika to speak of now, since the spies set fire to the Turkish quarters. It burned for days, and we used to go over on to the hills to watch it at night.  We were six miles away. I will never forget it, as we had to find food for 60,000 refugees.  Asked about the hospital, Sister Sexton told of the picturesque tent hospitals of the summer months, which had to be closed in the winter, when they came into town. 'And the cold, and the snow, and the rain!  My kit during the winter consisted of riding breeches, gumboots, two golfers, a leather waistcoat, a Burberry,and a sou'-wester.  It was a wonderful experience, and I liked it except for the food, which was rather awful.  And' —with a smile — 'we were issued with cigarettes (two packets a week) and matches, just like the Tommies.'  That at any rate speaks volumes for the opinion of those who control the British army nurses on the subject of smoking for women when on strenuous duty. '   'Sister Dora was in Salonika' when the Serbian retreat brought the Scottish women's; hospitals down over the border, and though the distances between the hospitals were too great to permit of visiting, she heard that Dr. Lillian Cooper and Miss Bedford were there.  In answer to a question regarding girl aides, I was interested to hear that Sister Sexton has unbounded admiration for them. 'I don't know what I should have done without my aides,' she said. 'I had the same girls with me in Malta who went to Salonika with, me, and I cannot speak too highly of them. Imagine a sister with four or five tents under her control, the staff sister with about 200 men to look after. Why, the girl aide can do a hundred, and one things, and help in a thousand ways. I loved my girls, and I can't understand how anyone can under-rate their services.  'The little sister's bright face clouded when we spoke of the men who haven't gone; of the women who keep them here. 'Oh,' she said, 'if they only knew, if they could only see what those men over tlhere are bearing for them! Howcan they stay here? ''Why, you wouldn't know there was a war, here in this peaceful country, when you come from it all — -the snow and cold and horror of it all— from those MEN among whom I have worked for years, suffering as they suffer—the heroes they are! You almost feel it in 'your heart to pity them, so bitter is your contempt for the, men who, being fit, are not there.  ''No, not a decoration,' as one remarked on the silver , badge suspended from a red-white-and-blue ribbon. 'This is the badge of Queen Alexandria's Reserve.' It is a silver medal in the form of a ring, bearing in the centre a large 'R.' . Another ornament Sister Dora wears is a brooch made of the enamel and gold from a Serbian captain's cap.  'Such a fine fellow,' the little sister said and whatever she feels about the 'men who stay at home,' whether pity or contempt, there was only one feeling in my heart regarding her as she sat smiling at me there in the sunlight, and that was a wonderful admiration, mixed with envy, for this little Toowoomba girl who for over, three years has been 'one 'of the valiant women behind the guns.' . .ETHEL G. HELY.