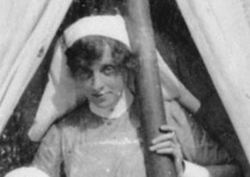 In 1894 Lizzie married John Mundell as Elizabeth McElroy.  He is a lot older than her
(born 1827- died 1911).  He puts a notice in the Brisbane Courier 19 and 23/9/1896 that
he will not be responsible for any debts contracted by my wife Lizzie Mundell, having left my home in my absence without justification and against my wishes. John Mundell.

After several years as Matron of Hay Hospital, Elizabeth is appointed Matron of Deniliquin Hospital.  Riverine Grazier 28/10/1910 is about her farewell from Hay Hospital and she has been with them for last six years.

Riverine Grazier 6/8/1915 mentions that former Matron Mundell of the Hay Hospital is at the Australian Voluntary Hospital in Vimereux, France.

Elizabeth does not return to Australia

News reached Victoria last week that Sister Gertrude E. Munro, daughter of Mr and Mrs Alexander B. Munro, of Alfredton, Ballarat, had died from illness at Salonica. It does not need a tragic event of this kind to make the women of Australia realise the heroic courage and self sacrifice of the military nurses abroad. On many occasions they have proved their bravery by sharing dangers with the soldiers both on the fighting field and in epidemic stricken zones. For more than twelve months Sister Munro had been on duty at an infectious hospital in medical camp at Salonica. It has been ascertained that tious hospital in the medical camp at pneumonia, supervening on an attack of malaria, caused her death. For many months the nurses there have had very little experience of surgical nursing, their patients being nearly all soldiers suffering with malaria or dysentery. One of Sister Munro's colleagues who saw her in Salonica at the end of August, stated that at that time she was in perfect health, but that she had lost a good deal of her robust condition, and had become very thin. Her complexion, however, had retained its bright healthy colour.Paying tribute to her character, this returned nurse said: "Sister Munro had a most lovable nature and was a general favourite. The news of her death will be received with the deepest regret by all the nurses with whom she has worked and the patients she has tended. I heard a matron of the British Regular Army say that Sister Munro was the-type of nurse who would be a comfort to any nursing: administrator. She was skilled in her profession, a reliable domestic manager, and a lovable woman."Sister Munro was one of the first nurses accepted for military duty at the Base Hospital, St. Kilda road. She left for India In 1916, and was attached to hospital at Poona, Bombay, and other places as a home sister. She joined Matron McHardie White's nursing unit at Salonica about a year ago. She was a trainee of the Ballarat Hospital, and remained as a staff sister at the termination of her probation.

It may be of interest to readers to know that in the war cemeteries of Salonika there lies only one Australian, Sister Gertrude Evelyn Munro, of Ballarat, Victoria.  She gave her life nursing the sick and wounded British soldiers there, at the time of her death, October 10, 1918, being acting-matron of a hospital of 1,600 beds.  As no other Australian graves were there, special permission was sought form the Imperial authorities to erect and word a tablet there in her memory.  Her name is also enshrined on the walls of the memorial list against the lovely 'Sisters' window of York Minster.

In 1929 Sister Murphy was a member of a party of returned service personnel and their relatives that travelled to the Middle East and Europe to visit war graves.

A party of 70 Australians, who left Sydney by the Baradine yesterday, to inspect war graves on the battlefields of Gallipoli, Palestine and France, will be absent six months…

Two well-known members of the party are Sister A Murphy and Sister E J Garvin of the Royal Prince of Wales Hospital Randwick.  Many returned Australian soldiers will recall that Sister Murphy was attached to the 14th Australian General Hospital at Cairo during the war.  She nursed many a wounded “digger” back to health and strength.  Sister Garvin, equally well known, served in hospitals in France.

“It is too wonderful for words to express to have the opportunity of visiting places where we spent so many years of our lives, and of renewing old friendships,” stated Sister Murphy.  “We shall never forget those years.  No one directly associated with the war could forget.”

Mentioned in despatches
Date of Commonwealth of Australia Gazette: 30 October 1919
Location in Commonwealth of Australia Gazette: Page 1653, position 59
Date of London Gazette: 11 July 1919
Location in London Gazette: Page 8835, position 71
General regret was felt when it was learned that Miss Frances Murray had passed away in a private hospital after an illness of some weeks.  Miss Murray was the fourth daughter of the late Mr. T. H. Murray, and had resided in Park Avenue since early childhood.  At the outbreak of war she went as a sister to Cairo, England and Belgium, and completed her service at a clearing station in France.  Returning in 1919 Miss Murray followed the nursing profession and was in turn matron of St. Mary's Home, Tannachy, and Mt. Morgan hospitals.  Probably due to her popularity on the other side Miss Murray brought back a fine collection of war trophies, which she generously distributed to her relations and friends.  She was of a genial disposition and popular with all who knew her.  The boys who came in contact with her at the war speak generously of her attention, to which they testified in letters since received by her relatives.  At the funeral, which was largely attended, Canon Hicks officiated.

Mrs. T. E. B. Russell, hon, organising secretary of the Nurses' Gift Fund, has received the following letter from Sister Leila Murrell, one of the Australian nurses at present doing duty at Bombay : 'After all your kindness to us feel I must write and let you know how we are faring. We had a very nice trip over ; had four days in Colombo, which we loved, then sailed by P. and O. Malta for Bombay. I'm sorry to say we were separated here (batches of five). My five are on the staff of the Alexandra War Hospital. There are no nurses' quarters — they are being built — so we live in a hotel, the Great Western, and go backwards and forwards to duty in our ambulance. It's the queerest life, so different from anything we have in Australia. Bombay would surprise you. It is one huge hospital. All the big buildings have been taken over by the military ; hotels, etc., and different palaces have been given. This place is near the docks, and was formerly wharf offices ; attached to it are two wharf sheds, holding about 150 beds. The patients who are practically well are sent there. They come down from Mesopotamia. At the present time there are twelve hospital ships in.They  look so pretty with their Red Cross and green lights ; some of them are huge. After the patients are better they are sent to the hills to get quite strong. About 60 of our boys (Wireless Squadron) went to the Gulf (about 12 days' trip) last week. We hate seeing them go. The day we arrived here we felt dreadfully lonely, and everything was so strange and dirty, when who should march up to the hotel but some of the Australian boys, who invited us down to the Y.M.C.A. to afternoon tea. It was just like a glimpse of heaven to see them. Then the next afternoon we gave them a party at the Y.W.C.A. We miss them very much now, and do trust they keep well. The boys can't speak too highly of the Y.M.C.A. They would have been lost here without it. The secretary is goodness itself, and went to no end of trouble to make them feel at home. It is just a Godsend out here. There is hardly a white person to be seen— out of uniform. We used to use gharries, a kind of old-fashioned buggy arrangement — it isn't supposed to be the correct thing to walk anywhere ; in fact, one can't, the heat takes all the energy out of one — and after each drive there is the usual wrangle over fares. Mo matter what you give a native he always wants more.  I do hope I haven't bored you with all this, but I know your life is one long work for the the nurses. You have done so much for us (more than we can ever thank you for) that feel sure you will be interested in this, the first unit of Australian Sisters for the Mesopotamia troops.'