Nurse Lilian Suttor, who is a niece to Mrs. E U Bowler of Forbes, and who is now at the front, will shortly appear before the King and Queen to receive her 1914 decoration.  Nurse Suttor, who is a daughter of the late W.H. Suttor, M.L.C. of Bathurst, left these shores with Lady Dudley's Nursing Contingent.

discovery.nationalarchives.gov.uk/details/r/C10800974#imageViewerLink​
Embarked for Australia 08 May 1919 per 'Roda'
Matron of Grafton Hospital for 14 years retiring in February 1934
Died 04 August 1950 in a private hospital in Darling Point,  Sydney, NSW
​
Sister Lilian Suttor, who returned to Sydney recently, after four years' service in France in the Queen Alexandria Nursing Service Reserve, has
been awarded the Royal Red Cross (second grade) Sister Suttor is a daughter of the late Mr. W. H. Suttor, late of Bathurst and Mrs. Suttor of Darlinghurst.

National Advocate Friday 15 August 1919 page 2
Mrs E U Bowler, of Camp Hill, Forbes, has a niece at the front who has shortly to appear before the King and Queen to receive her 1914 decoration. This is Nurse Lilian Suttor, daughter of the Hon. W H Suttor, of Bathurst, who prior to her departure from these shores with Lady Dudley's nursing contingent in the early part of the war was Matron of the Bathurst Hospital. For some time Nurse Suttor has been right up with
the boys behind the firing line in France. Her mother, who is over 80 years of age, is now living in Sydney.

Forbes Times Friday 19 July 1918 page 4
Another Australian Red Cross Nurse has brought honour to the Commonwealth in the person of Sister Lilian Suttor, of the well-known Bathurst clan. She has been awarded the coveted Mons Medal for conspicuous bravery. Sister Lilian Suttor has seen active service since practically  the beginning of the war. When hostilities were declared she was on her way to England, and upon arrival; immediately linked up with the Australian Voluntary Hospital at Wimereux. Here she continued her labour of love, even after the A.V.H. was taken over by the British Government, and became No. 32 Stationary Hospital. What the special act of bravery was which secured the heroine so high an award is not yet known. Sister     Lilian Suttor is the daughter of the late  William Suttor, M.L.C., and Mrs. Suttor,of Springfield Sydney. Her brother, Mr. Gwynne Suttor is well known in Perth.

Western Mail Friday 23 August 1918 page 27
OBITUARY
MISS L. C. SUTTOR.
The death has occurred in Sydney of Lillian Charlotte Suttor, fourth daughter of the late William Henry Suttor, M.L.C. She was at one time matron at Grafton Hospital.  She was born at Cangoura Bathurst.
She trained as a nurse at the Bathurst Hospital. In June,1903, she was appointed matron of the Wellington Hospital. She held that position until April, 1910, when she - was appointed matron of the Bathurst Hospital.  She resigned from this hospital in February, 1913. The late Miss Suttor was on her way to England in 1914 when war was declared. She went to France to nurse soon after arriving in England, and served at the Military Hospital at Wimereux and Rouen. She joined Queen Alexandra's Imperial Nursing Service and served at Reserve 4 General Hospital, B.E.F., Etaples, France, and in other places. She joined the A.I.F. for a while and worked at Lady Dudley's Hospital. When this hospital closed she joined the B.E.F. She was awarded a medal as Associate of the Royal Red Cross. She also held the 1915 medal. She served in France until the end of 1918,  returning to Australia in 1919.   Early in 1920 deceased was appointed matron at the Grafton District Hospital, which position she held until 1934, when she resigned owing to ill-health.
She died in a private hospital at Darling Point on August 4.

The Register Adelaide Wednesday 14 May 1924 page 8 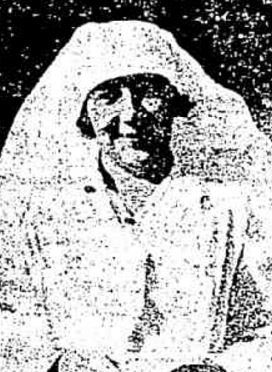 The Riverine Grazier Friday 27 June 1952 page 2
ACTING under instructions from the Executor in the Estate of the late Miss Rose Ann Sweeney, we will offer the Town Property and Dwelling erected there on at 77 Pine St., Say,' for sale by Public Auction on the above date. . ' '. .Land is contained in Cert, of Title Vol. 910 Polio 138 and has a frontage of 38 feet to Pine St., Hay, and a depth of 132 feet.  House is constructed of weatherboard and contains 4 main rooms, kitchen and bathroom with gauzed verandah on back, and open verandah on front, and connected with telephone, electricity, water and sewerage. IMMEDIATE VACANT POSSESSION will be given,

After l8 months' duty as assistant to the Matron-in-chief of AANS, Matron L. Symons has been transferred to the post of matron of a military hospital in Victoria.

Matron Symons has had a distinguished career. She served with the AANS in the last war, for part of the time at Salonika. She is a native of South Australia and trained in Adelaide hospitals.