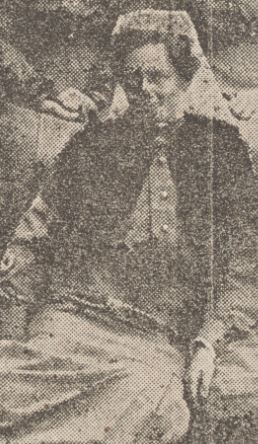 Formerly of the Coast Hospital.

Sister Dickson is a Queenslander, and originally came from Brisbane. She received her training in mental nursing at the Hospital for Insane, Callan Park, and her general training at the Coast Hospital, Little Bay. She was one of the very earliest to offer her services on the out-break of the war, and left with the first batch of Australian nurses for the front.

Sister Dickson was for some time on transport duty, working between Malta, Egypt, and Lemnos, and later on went to England, and finally to France, where she was attached to a casualty clearing station.

For the past six months Sister Dickson has been acting as secretary to England's Matron-in-Chief at the headquarters in Horseferry-road London.

Born 1883 in New Zealand
Daughter of Peter John DICKSON and Catherine nee DAVISON
Enlisted 02 September 1916
Embarked 09 December 1916 in Sydney per “Kaiser-I-Hind”
Service in Salonika and England
Promoted to Sister 21 May 1919
Returned to Australia 21 May 1919 per “Osterly” On Duty
Appointment terminated 15 August 1919
Did not marry
Died 18 August 1963 in Belmont, NSW
Late of Belmont, NSW

Sister May Dickson, of the Queen Alexandra Imperial military nursing staff reserve was buried in Melbourne today with full military honours.  This is the first time in the history of Australia that a woman has been thus honoured. Deceased was on her way home to Sydney, but died shortly after the vessel reached Melbourne.

Sister May Dickson, of the Queen Alexandra Imperial Military Nursing Staff Reserve, was buried today with full military honors, the first time in the history of Australia that a woman has been thus honored.  The scene was most impressive, and among the large crowd which witnessed the carrying out of the solemn rites many were deeply affected.  As the cortege passed slowly from the Base Hospital along St. Kilda road, and up Elizabeth Street to the Coburg Cemetery, the strains of the Dead March in Saul caused women to weep unaffectedly and men to uncover their heads reverently.
Shortly after half-past 11 o'clock the procession moved from the Base Hospital in the presence of a large concourse of people.  It was led by the Domain Band, with muffled drums and instruments.  The big drum and the side drums were draped in black crepe, as also was the drum major's staff, while the drum major walked behind instead of leading the band.

PLACED ON GUN CARRIAGE
The coffin was placed on the carriage of an 18 pounds field gun, and was covered with the Union Jack. Resting on the coffin lid were the caps and hat of Nurse Dickson, as well as a beautiful wreath, and the gun carriage was drawn by six black horses, controlled by soldiers who rose as postillions.  About a score of non-commissioned officers and privates, representing the men's nursing staff at the Base Hospital, followed.  The non-commissioned officers, who took their places on each side of the coffin sere the pall bearers.  They were all returned men, and some hand been nursed by the dead sister in England.
A motor car followed, laden with wreaths and containing representatives of Sister Dickson's branch of the nursing service; then came six motor cars containing the staff nurses, the sisters, and the matrons: and the medical side was represented by Colonel J. Steell, Acting Principal Medical Officer, and the military side by Captain G.. Sykes, representing the Director-General of Medical Services.  The chief mourner was an aunt of Nurse Dickson, who was accompanied in the car by Chaplain-Captain Thomson, of the Presbyterian Church, and nurses.
Chaplain-Captain Thomson conducted the service at the graveside, and a firing party in charge of 2nd Lieutenant P. Courtney fired the customary volleys over the grave.  A bugler sounded 'The Last Post'.  There was a large body of people at the graveside, and the solemn ceremonial impressed all present.
The profusion and beauty of the wreaths formed a feature of the obsequies.  One was forwarded by Lady Helen Munro-Ferguson, wife of the Governor-General.  Nurse Dickson's companions in the Queen Alexandra nursing service in Melbourne sent an exquisite floral tribute.  Others were from the matrons, the senior sisters, the sisters, and the Red Cross Cafe at the Base Hospital.  Nearly all the flowers were tied with red, white and blue, which are the nursing colours of the order to which Sister Dickson belonged.  Magnificent white roses and purple blooms predominated.

FOR HER COUNTRY
Nurse Dickson was a native of Australia, and her education as a nurse began here.  Not long after the war broke out she went to England and joined Queen Alexandra's Imperial Military Nursing Staff.  She did a great deal of very hard work in England, and gave her life in the service of her country in as complete a sense as if she had died on the field of battle.  When her health broke down under strain, it was thought that the climate of her homeland might restore it.  She was on her way to her home in Sydney, but when the vessel reached Melbourne she was so ill that it was necessary to take her ashore. Though she did not reach her own home, she had the affectionate care of her sister nurses, who did all that it was possible to do for her.  Nurse Dickson was 34 years of age.