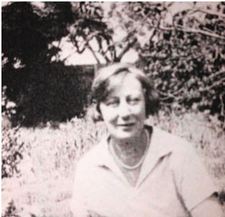 In August 1919 Nurse Violet Duddy returned home to Queenscliff Victoria after four years serving
in the Australian Army Nursing Service. A crowd met the motor car as it arrived and a Civic Reception
in her honour was held in the Town Hall. Following this event, a Welcome Home Parade, led by the
town band and accompanied by the Ladies Welcome Home Committee, complete with lighted
lanterns, preceded to Violet’s home.

People gathered at the street corners and joined the parade. At her house there were fairy lights all through the trees to celebrate her homecoming. The band played Home Sweet Home and the crowd cheered as Violet walked up the path to her front door.

Embarked for France per 'Kanowna' 04 July 1916 from NSW
Part of a party of twenty Australian Red Cross nurses, sponsored by the NSW Jockey Club, and know as the 'Bluebirds' because of their blue uniforms. 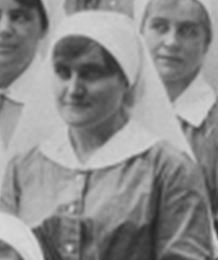 Mr. J. Duffy, engineer to the MacIntyre Shire, received the following cable (says the 'Inverell Times') :
'Can Dorothy marry after the war? Reply Barton, Second Clearing Station, France.' The Dorothy
mentioned is a daughter of Mr. and Mrs. Duffy. At the outbreak of war, Miss Duffy was a nurse at the Sydney Hospital, and was one of the first to volunteer. She proceeded with the first batch of Red Cross nurses to England, and was also a member of the first contingent to go to France. Her promotion was rapid, and she now occupies an important position at the station mentioned above. The
bridegroom-elect is Dr. Barton, who was practising at Coonamble when the war broke out. Mr. Duffy consented to the engagement, and cabled his congratulations to the young couple.

The Freeman's Journal Thursday 04 April 1918 page 18
The Walker Convalescent Home, now used as a hospital for influenza victims, has been for some weeks under the medical supervision of Dr. Percival Davenport who, with Mrs. Davenport, has taken up his abode at the hospital. The doctor has lately sold his practice at Singleton with the intention of settling at Bellevue Hill. His Singleton practice hos been taken over by Dr. Alan Barton, who has just returned from the front. He has brought home his bride, an Australian girl who, during the war, was nursing with the French Army. Owing to the loss of a finger her services were rejected by the British. She joined the French, and attained much distinction, being mentioned in despatches.  Before her marriage she was a Miss  Duffy of N.S.W.

DUGGAN, Mary aka May

The death occurred in Melbourne on 3rd June of Mrs. Lily Hemphill, wife of Mr. Robert Hemphill, of North Yathong, Jerilderie. Deceased, who was formerly Matron Dunlop, was a returned nurse, having left Australia with the first New South Wales Contingent.

Lily Hemphill, a former war nurse, of a'Beckett street, city, died in the  Royal Melbourne Hospital last night. It  is believed that she was suffering from the effects of a corrosive disinfectant.

​Outgoing Passenger Lists show that Irene obviously returned to England on two occasions after the First World War ended.  She is found departing from the Port of London on 23rd September 1924, on the ship ‘T.S.S. Moreton Bay’.  She arrived in Fremantle on 24 October 1924 – the Incoming Passenger List gave her occupation as “Hospital Nurse”.

Again, on 06th October 1937, she left Southampton on the ship ‘Esperance Bay’.    Irene docked in Fremantle on 5 November 1937- the Incoming Passenger List gave her occupation as “Matron (Nurse)”.

In the Australia Electoral Lists of 1925, 1931, 1936 & 1937, Irene was found being the Matron at the Wooroloo Sanatorium, Northam, Swan, Western Australia.    Wooroloo, incidentally, means “high place on a high place” in the aboriginal language.  There was a Matron’s House on the site, for Irene to live in.

Additionally, in 1939 & 1941, Irene is found within a list headed ‘Nurses – Midwives (uncertificated), at Wooroloo.

Irene retired from her job as the Wooroloo Sanatorium Matron c1941.  The sanatorium buildings that formed the sanatorium are now used as a low security ‘open’ Prison.

Information and research courtesy of Heather Johnson and Vicki Owens
TORPEDOED BY HUNS.

There arrived at Fremantle Sister J. H. Dunn, who before the war was associated with the staff of the Northam Public Hospital. For more than two years Sister Dunn has been participating in war-nursing work, and her experiences during that period have been exciting and varied.  In December, 1914, Sister Dunn left Australia for London, where she joined the staffs of various hospitals, acting as a voluntary worker in a service to which her training tendered her capable of lending much assistance. While in England she experienced all the horrors and nerve shaking effects of Zeppelin raids. But Miss Dunn's most thrilling experience did not take place until, having completed her two years of service, she was homeward bound for Australia. She secured her passage with six others on board the s.s. Port Adelaide, which left London on January 31 last. For three days the voyage was uneventful but when the vessal was about 170 miles off the south coast of Ireland she encountered a German submarine, which fired a torpedo at her at about 4 o'clock in the afternoon. For the time it appeared that the shot had not struck the vessel in a vital spot, and passengers commenced to go below to gather together a few things, as a precautionary measure. While Miss Dunn was in her cabin an hour after the first shock she felt the striking of a second torpedo. 'The ship listed slightly, but showed no signs of sinking. The passengers were gathered together, the boats manned and lowered, and the crew and passengers waited around in the boats to watch the fate of the steamer. For two hours the vessel remained afloat, and just as it appeared that the ship was safe the Huns launched a third torpedo, and sent her to the bottom. The submarine then rose to the surface and approached the ship's boats. The Germans took the chief officer prisoner, and visited the other boats in search of the captain. That officer. the purser, and others were in the boat to which Sister Dunn had been allotted, and as it was the last boat visited by the submarine and the Hun officers stood on the conning tower with levelled revolvers, the captain thought it better for the welfare of all concerned that he should give himself up. This he did, and the chief officer was released. In perfect English the Germans conversed with those in the boats, and made inquiries as to the name and particulars of the steamer, and her cargo and destination. The chief officer, who had been a prisoner on the submarine for nearly an hour, said that he had been told that the submarine had followed the Port Adelaide since 8 o'clock in the morning, and in the meantime had sunk 16 other steamers. After the enemy had submerged and gone off on another chase, the cast-aways awaited about for the arrival of the s.s. Samarinda, a Dutch vessel with which they had been in touch by wireless before the steamer sank. Shortly after 9 o'clock the Samarinda appeared and took aboard those in the boats. A two days' journey took them to Vigo, a port on the north coast of Spain, where with the crews of six other vessels of`various nationalities they were handed over to the care of the British Consul. The passengers and crew of the Port Adelaide lost all their papers and personal belongings, and it was necessary for them to wait in Vigo for 16 days for new pass-ports and instructions. Thence they travelled overland to Gibraltar through Madrid, and joined an Australian-bound mail steamer at that port. Even then their unpleasant experiences were not finished for in the Mediterranean they were chased by a submarine, and had to put back to the fortress for several days to await the arrival of an escort: and when nearing Port Said they again had signs, that an enemy craft was aware of their where abouts, although nothing eventuated.  Sister Dunn pays a high tribute to the attention she and her distressed friends received at the hands of the captain of the Dutch ship which rescued them. She regrets most of all the loss of those treasures of war which had been given to her by soldiers for whom she had cared in the British hospitals, for beyond a hair comb and the clothes she wore she took nothing from the Port Adelaide. The lot of a mother and two children who were fellow-passengers was particularly hard, especially in Spain, where they found themselves in a strange land without friends.  Sister Dunn left on Saturday to resume  her position at the Northam Hospital.

Red Cross Nurse Agnes Dwyer, daughter of Mr. and Mrs. Dwyer of Peisley Street, who arrived home from Salonika a few months ago, was last week the proud recipient of the Grecian "Order of Merit," awarded by the Government of Greece for services rendered to their country.  Nurse Dwyer was ordered to Salonika from Egypt, and was attached to afield hospital, attending in addition to our own soldiers, those of Greece.  The decoration, which is attached to a yellow rib and with a black border, has been awarded to very few, and is equal to the highest British distinction for nursing sisters. Nurse Dwyer, who had a rough time in Salonika, is now nursing at George's  Heights Convalescent Home, and the presentation took place there. The nurse's many Orange friends will be pleased to hear of her good fortune.