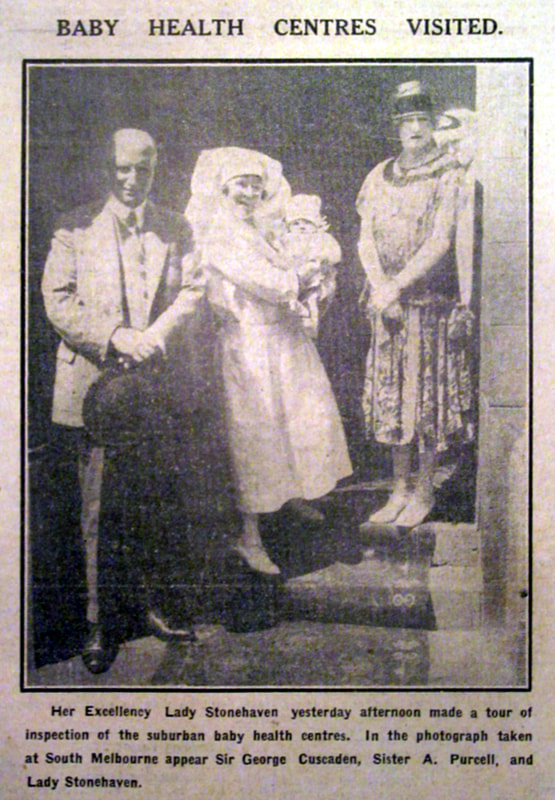 Given military honours the cremation of the remains of Sister Anne Purcell, who died suddenly at Hobart on Sunday, took place yesterday at Cornelian Bay.

Sister Purcell was born at Yea (V.), and  received her nursing training at the Melbourne Children's Hospital. She served as an army sister with the A.I.F throughout the war of 1914-8, and was mentioned in despatches. Subsequently she was attached at Madras, to Lady Ampthill's nursing service in India. Between these periods of service she had charge of the Hamilton Russell ward at the military hospital at Caulfield (V. ). and on returning to Australia from India specialised in infant welfare work. In this connection she had charge of the Victorian Government's child welfare training school at Melbourne. She was a well-known writer on this subject and in Melbourne regularly gave radio talks on it. In recent years she was matron at Bostock House, Geelong Grammar School, and at the time of her death was housekeeper at the Friends' School, Hobart.

The cremation service was conducted by Archdeacon D. B. Blackwood. The ceremony of the poppy was performed by Capt E.W. Lacy, and "The Last Post" was sounded. The pall-bearers were Returned Sisters Elliot, Morris, McBean, Lyne, Baudinet,and Sprent. The chief mourners were Dr. J Sprent, Col, J. P. Clark Messrs W. Clarkand A. Clark, Ald. E. Sorell Mr. C. B. Harcourt, and Mr C. Cox. The Friends'School was represented by the headmaster (Mr. E. E. Unwin), members of the staff and the senior house prefect.
The funeral arrangements were conducted by Alex Clark and Son Ltd.

When Sister E. A. Purdon visited the T.B. Sailors  and Soldier's Association office at  the  Anzac Memorial last week,  she was presented with a gold wrist watch by the association's State Secretary,. Mr. A. J. Chambers. Sister Purdon is retiring  from her long years of service  with repatriated service men of the  last war. She is an ex-A.I.F. Sister, and has also been looking after returned men from the present war. Sister Purdon is a sister of Mr. F. W. Purdon, of Gilgandra.