Awarded Royal Red Cross (2nd Class)
Date of Commonwealth of Australia Gazette: 25 July 1917
Location in Commonwealth of Australia Gazette: Page 1544, position 25
Date of London Gazette: 23 February 1917
Location in London Gazette: Page 1950, position 5
Sister Margaret Eldridge,Who has been awarded the Royal Red Cross for service at the front. Sister Eldridge was trained at the Royal Prince Alfred Hospital, Sydney. She is at present attached to the Northfield No. 2 War Hospital,Birmingham.

A quiet wedding was celebrated at All Saints' Church on May 22, when Mr John Henderson Pollock (late of the AIF, and eldest son of Mr and Mrs J Pollock of Croydon, Sydney) was married to Miss Doia Leila Ellis (late of the
AANNS, and youngest daughter of the late Mr and Mrs J B Ellis of Brisbane) The Rev T M Nightingale officiated and Mr Robert Kave presided at the organ The bride who was given away by her eldest brother, wore a frock of ivory crepe de Chine the wedding veil of embroidered Brussels net (previously worn by her mother) being arranged with a wreath of silver tissue and orange blossoms (lent by her cousin, Mrs D W Chandler). She carried a bouquet of white roses and sweet peas veiled in white tulle.  Miss Edith Pollock (sister of the bridegroom) was the only bridesmaid and had frock of cream net finished with a girdle of floral ribbon, was worn with a hat of black tulle.  She carried a bouquet of pink roses and white sweet peas (the gift of the bridegroom).  Mr. P Midgley was best man.  After the wedding breakfast, which,was held at a city cafe Mr and Mrs Pollock left for Tewantin,  The bride's going away dress was of blue fugi worn with a black hat with Oriental touches.

NURSES FOR THE WAR

Nurses Bradshaw and Elmers, who trained at the Wangaratta District Hospital, have offered their services to the Defence Department for war work abroad, and have been accepted. They have not yet been notified as to the date of their departure.

Miss Olive Embling, now Nurse Embling, has gone to England to take on war nursing. Her father is a Lieutenant-Colonel in the A.M.C., on the way to the front.

Born Louisa, c1875 in Finland
Daughter of Emilia ENBERG, Finland, Russia
There are shipping records of her and her sister Elin arriving in Australia in 1913.
Next of Kin – Ellen Enberg at 95 Ridge St, North Sydney, NSW
Age 42 years
Enlisted 04 July 1916 in Sydney
Embarked 09 December 1916 per “Kaiser-I-Hind” to Suez – Nursing Staff
Returned to Australia per “Euripides” 22 February 1917 – Nursing Staff
Re-embarked “Ulysses” 09 May 1917 to England – Nursing Staff
Briefly attached to 2AAH, Southall
Returned to Australia per “Benalla” 26 October 1917- Nursing Staff
Appointment terminated 10 November 1917
There is a record on NAA website of her being issued with an Alien Registration Certificate No 9834 on Thursday Island 24 December 1920.
A passenger record for Miss A. E. Enberg leaving Sydney October 1924 for San Francisco, California on A.M.S. Sierra.
Letter – Military Forces of the Commonwealth to Secretary of Defence - Melbourne

“Approval is requested for the termination of appointment of Staff Nurse ENBERG.

This nurse has been returned to Australia and states that the War Office, London would not accept her services.  There is every reason to believe that she is of enemy nationality and it is considered advisable that she should not be further employed by the Department.” 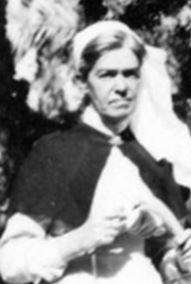 'THEY ARE THE BOYS.'
A NURSE ON AUSTRALIAN SOLDIERS.

Matron Ennis, Superintendent of Military Nurses in N.S.Wales, chatted to the members of the
Red Cross general committee on her experiences in Egypt amongst the Australian soldiers in the hospitals.  There never was anything quite like the Australian boys,' she said. 'No matter how tired they were, how desperately wounded, they were as bright and plucky as could be. They were regular children in some
ways.  They, loved to have mascots  and things of that kind, and the companionship between them was wonderful.  Boys who had been together for some time absolutely refused to be separated. 'We'll sleep, anywhere, Sister, on the floor, any where at all— but we're, mates and want to be together,' -they would
say.  It was very wonderful and very touching,- and they would do all kinds of things for one another.
If taken from their mates they become horribly home-sick. They are queer customers, though. They
can be 'managed' quite easily — but they, won't be 'ordered,' and that characteristic... is just as
pronounced, away from home as it was here in the bush, -where you get exactly the same type of man.
'In England I began to 'think my regard for the boys of our own country gave them an imaginary physical superiority over any of the others, and when I saw a British regiment marching the streets of London I feared ' this 'was so. But at the same moment I an Australian company swung into view.'  Why, they seemed to be three inches taller than the other men!  Matron Ennis spoke of the difficulties under which she laboured in the early days of the campaign for lack of accommodation in the hospitals. Everything was frightfully rough, she said, and in a tent containing a fair number of beds, equipment in the way of basins resolved itself into a solitary enamelled dish. This had to do duty for washing and shaving purposes and after it had been subjected to a good scouring by an orderly had to be used for Carrying the dinner across from the cook-house.  Once the Red Cross goods came to hand, however, conditions were much improved, and there was no lack of the articles generally needed.

Born December 1888 in Ulladulla, NSW
Daughter of William EVANS and Rebecca nee MIVIDOCK
Of Lindfield, Sydney, NSW
Her father was a school teacher in Ulladulla and died of typhoid fever in 1889 when she was a few months old.
Age 28 years
Enlisted 05 June 1917 at Sydney
Embarked 03 September 1917 per “Kyarra”
Service Egypt
Returned to Australia 27 June 1919 per “Madras” On Duty
Appointment terminated 03 September 1919
Did not marry
Died 04 February 1965 in St. Leonards, NSW
Resided Lindfield, NSW


She received her 2 service medals, one with an Oak Leaf, for being Mentioned in Dispatches - a well deserved honour, according to the men whom she served. Two old Veterans told the Contributor that they were in tents, taking sick and wounded directly from the battle fields in mud and slush, with bombs dropping around them. The nurses were constantly running out of dressings and they operated in the snow, freezing cold. "They were so brave," the Vets said.Clarice kept diaries but they disappeared at the time of her death and she was not known to talk of her personal experiences during her lifetime. "As far as I can make out," the Contributor wrote, "She didn't nurse after 1919." However during the Second World War, Clarice and her sister used to spin wool and knit socks for "the boys".